Expect Scream to be found soon 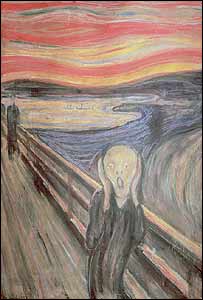 The Norwegian police have finally arrested two suspects for robbing the Scream and Madonna from the Munch Museet. The paintings are yet to be recovered though. The Scream is the best known painting by the Norwegian maestro Edvard Munch which is also known to many of us Gen X people courtesy an MTV cartoon snippet based on it. The paintings were robbed in broad daylight in August last year and had been stolen once before. I wonder whether the museum officials have any hand behind this, and all with a noble purpose.
Once an art is stolen, it can reach instant popularity. The Mona Lisa by Da Vinci reached instant fame once it was stolen in 1911. An italian workman stole it from the Louvre in Paris as he was disturbed to see so many italian paintings in France. Once stolen, thousands of visitors came to see the blank space in the wall and this began the process through which even our panwala knows the painting.
The Scream is well known but not well known enough like the Mona Lisa or the Sunflowers. I have been to the Munch Museet myself and even though Norway is a sparsely populated place, there were hardly more than 30 people in the museum that day. However the painting is quite recognizable and will be difficult for the robbers to sell. When the Scream was stolen the first time, the thieves accidentaly set off the alarm but no guard turned up. The thieves then left a note saying "Thanks for the poor security."
Posted by Shivaji at 7:58 PM