Because it is there 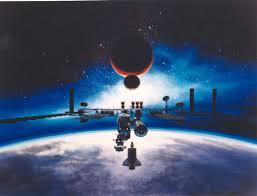 When I was a kid, I had a big crush over astronomy and space science and would spend hours making amateur devices to look at the sky. As I grew up and learnt to think through things, I got increasingly disillusioned and the Columbia accident coupled with our Met's continuous failures to predict monsoons convinced me that space science was a total waste of money, talent and effort. Globally space research agencies are going through the same thought cycle as achievable near-medium term goals seem rather mundane (and correctly so) to some of the best minds in our world. In the midst of this came George Bush's fillip for NASA and the Discovery mission-the first manned flight by NASA after the Columbia acident, will take place this Wednesday. This mission also made me think if there is any need for furher efforts in space science at all.
I believe that space science could be hypothetically of the folowing uses:
1) Use for our day to day lives: Lot has been done-Satellite TV, Radio, SatPhones, weather forecast etc. The next logical use could be oil extraction from Saturn, designer stones from asteroids, spas in moon, space tourism etc. The problem is while many of these seem too frivolous to invest such huge sums in; economics wouldn't permit mineral extraction from planets for a long time since there is enough scope in improving efficiences back in earth.
2) Use for defence/ security: Once again there are lots of uses through reconnaisance efforts, satellite guided systems etc. There is enough that can be done through existing systems only and gone are the Regan days when public opinion could be in favor of spending trillions to build Space Wars capabilities. Most agree that softer intelligence will prove a lot more critical in solving terrorist threats.
3) Psychological use: Space research could be of immense help to lift up the morale of the people- Appollo mission for instance told Americans in Vietnam days that they could win the Cold War. Once again, Regan days are gone. Other countries like China and India could try manned space flights to achieve the same opium effect, but that would be like re-inventing the wheel.
4) Because its there: Finally, the last reason why we should invest in space science could be just "because its there". The arguement for further investment will be just to whet the curious appetite of the human mind and the hope that someday something may come out of it all.

The problem with space science is that it is the last reason which is currently posing as the strongest reason why we should invest in this. Gone are the days when Newton could do astonishing things (in a relative sense) just by using a prism. Modern science calls for huge collaborative efforts involving billions of dollars. With no major commercial gain in, all the money has to come from public bodies and they are already pressed by rising pension and healthcare costs coupled with the fact that probably half of world population is impoverished. So is the last reason strong enough? I can't justify it through reason but the romance of the idea urges me to the conclusion "Yes".
Posted by Shivaji at 3:21 AM

if u remember, coupla yrs back the last PM made a commitment to a moon mission. (a la JFK of '61 i guess!) defntly reason number 4 at play :)
das, hows silicon valley..?

I would like to see India and China develop their own space programs. I don't see it as "reinventing the wheel," necessarily. The US did it first, but that doesn't mean they did it best. A new program with a fresh start could develop newer and better technologies.