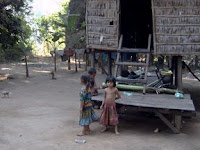 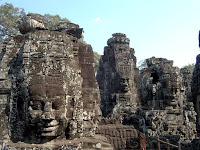 I went to Angkor Wat last week to pray for Aiswarya and Abhishek’s happy married life. The numerous temples are indeed magnificent and must have been splendid in their age. These once glorious temples are surrounded by one of the most extreme forms of poverty. (For anyone who is shocked by scenes of poverty in Mumbai must visit to understand how much worse is still possible.) So while ruins of magnificent ancient palaces, temples and monuments are some of the most popular tourist destinations worldwide; has anyone ever wondered: What happens to the ruins of the poor? Most of us are always so vainglorious about how great our past generations were: the golden periods, the divine kingdoms, the age of religious co-existence, flying saucers, nuclear bombs at the tip of an arrow, magic potions; But we only know these from the ruins of glorious monuments built by the kings and nobles, fictional mythologies and the histories of the age written by patronized literati of the time. How much do we know about the past of the vast majority of the people from these ages? How can we know if the poor today are worse off than the poor of those gilded ages? As in , the poor from any time don’t leave any ruins. One can only guess the exploitation they must have endured while the kings built these fancy structures coming out of harsh labor and tax money. But hang on: today’s poor will indeed leave behind some ruins: the ubiquitous polythene bags. Our future generations will be clearly able to make out how we lived just by dating these, counting these, and looking at these polythene bags. Its simple, the poor use small and thin shapeless bags with nothing written on them, the upper classes use bags with fancy rope handles with non-English sounding names written on the bags in a stylish font; the middle classes, people shopping at supermarkets, use big shapeless bags with English or local language words written in them. And in too, streets are littered with cheap looking polythene bags, perfectly correlated with the extreme poverty there. These enduring witnesses of history; the polythene bags; who invented them?

And coming back to Aiswarya and Abhishek; it’s a national sin if you are not joining them in their quest to cover all temples to eliminate the curse of the Mars. What a brilliant display from the pre-eminent faces of a resurgent , promoted so aggressively by our media whose freedom we take pride on. More posts on to follow.

Nice blog. Multiflex is a pioneer in the field of packing materials manufacturing and providing packing solutions to our valued clients. We are renowned since 2003 for our products such as Shopping Carry Bags, Plastic Carry Bags, Food Packaging Bags, Polythene Bags, and Chemical Packaging Bags that fulfills the packing needs of our customers with maximized efficiency and quality. Polythene Bags