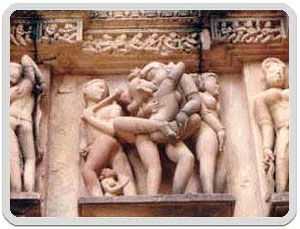 In response to the “Nigah Queerfest 07” being organized by gays/ lesbians in , Indian Express writes, “Being called gay is widely considered an insult in a country where ancient temples, murals and other arts such as the Kama Sutra--the cult book of love written by an ascetic 2,000 years ago--graphically describe gay sex.” Indeed, this book, the carvings at Konark and Khajuraho, etc. have been evoked by educated Indians in the guise of liberalism whenever they felt that personal rights have been attacked by the conservative Hindu right-wingers. Given that these reactionaries posing as the sole safe-keepers of “Indian” morality have been especially busy the last three months, the supposedly liberal media has mentioned these books and sculptures almost every day (Richard Gere- Shilpa Shetty affair, M F Hussain and Chandra Mohan artworks, Valentines Day etc.)

And in most cases, this is the only reason cited for defending the case for liberalism. This overuse of these works has increasingly made the case for liberals appear dumb. Are people supposed to stand up for certain rights only because a few ancient people (two thousand years back) supposedly allowed them? Then is that why much of the liberal elite and media given comparatively so little attention to caste-related social attitudes and crimes, since certain ancient texts (Manu Samhita) endorse them? And is that why we have always ignored the most critical need of India- Land Reforms – since our ancient texts and general culture couldn’t ever see a case for it? And is that why liberal Indians have maintained total silence on the issue of social reforms for Muslims, since there are no such parallels to cite for that case? And will we continue to support Saudi Kings who have continued to ban even basic rights to their women because their traditions supposedly allow such macho behavior?

The self-appointed morality brigade has countered that “What (Khajuraho, Kamasutra) was once acceptable we do not know under what circumstances becomes unacceptable in another era and vice versa.” And these reactionaries are apparently winning the debate by collecting a few hooligans and instigating violence, thereby installing a fear in exercising personal freedom. If the media and our elite really want to make a difference, they have to come out of this time warp. They have to dump such simplistic off-the-shelf reasoning to argue for personal freedom. Forget Khajuraho, Kamasutra, and Konark, there is a simple, strong and universal case for such basic personal freedom as to decide what one can do in his or her own bed., irrespective of whether they were supported in some ancient book or not.

" Are people supposed to stand up for certain rights only because a few ancient people (two thousand years back) supposedly allowed them? "

What you say is nosense.
So because something happened 2000 years ago it's irrelevant ?
But do you realise that 2000 years is NOTHING compare to the history of humanity! What is ridiculous is to focus on your era like it was the only one relevant. You'll get old even before you realise. Your present is already past. Look, you wrote that 7 years ago. According to your own standards I shouldn't give it any credit, since it's a thing of the past.
But therefore, nothing is important! Since every present is becoming past.

This old temples are still there nowadays while your little blog will be wiped in past in less than a century. Think about it.

This Pakistani Escorts is something we can gladly guarantee you. It is extremely Islamabad Escorts normal for you to imagine that we are misrepresenting yet in all actuality.