The magazines of the world 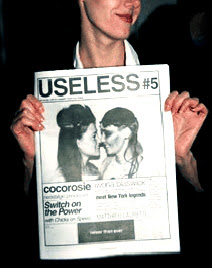 How many magazines can mankind support? On last count, Indiatimes was offering over 550 magazines and the list didn’t include regional language magazines in . In , there are probably over 700 magazines. Indeed, there are now magazines for everything. There are magazines for 45+ women (More), car audio (In Car Entertainment), runners (Running times), “true accounts of strange and unknown such as UFOs (Fate), and logging railroads (Tall Timber Short Lines). In fact, if any topic doesn’t have a magazine dedicated to itself, rest assured, that topic is only being discussed by Noam Chomsky and Puff Diddy. So much so, that the comedy series Little Britain had a skit where a buyer asks a storeowner if he has a magazine for people with athlete’s feet, and the storeowner actually had one.

The magazines are also being sold in new ways. Amazon.com allows you to search for magazines by interest areas and price. Consider the life of a person who decides that when buying a magazine, it being below $10 is the first criteria, the topic probably being the second. Magazines with internet-only editions have also sprung up.

There are magazines with wonderful names such as The Christadelphian Tidings of the Kingdom of God (a Bible magazine), and some really in-your face named ones such as American Baby (for Parenting) and Girlfriends (for lesbians). One might wonder if such magazines are indeed necessary. Well, magazines are handy indeed. Many magazines come together with valuable items: Filmfare in use to come with free soaps, toothpaste etc. for many years, Good Housekeeping comes with a free noodle bowl, 3 sauce bowls and 11 packs of Knorr Chinese meals. Quite often, the magazines also have very useful articles: “All about Guys”, “Get your Guy”, “100 most shocking secrets”, etc. And who can do without the most significant innovation by magazines: The Agony Aunt sections. With the sophisticated queries and equally sophisticated answers, these columns are an elixir of life. And it serves as a great reflection on the limitations of mankind that despite the Agony Aunt columns, many of us are yet to be fully satisfied. Go friends, if you have a problem in life, don’t be shy to reach out to an Agony Aunt in any magazine.

But one can argue that given most weekend editions of most newspapers now come in excess of 200 big pages, how can magazines still be relevant. Well, they will be, one can’t pretend to be reading a Sunday newspaper the next day, but one can pretend to be reading a magazine till the next issue comes out. Also given all the clutter, is there any further potential for magazines? Of course, there is. One might say that if there is no magazine to match your areas of interest, then its time for you to realize that your interest area is of not even miniscule global significance and so you should get along with life. But I still believe that there is no reason why I should not have a magazine that gives me monthly updates on Angeline Jolie’s and Madonna’s adopted kids. A magazine dedicated to Amitabh Bachhan’s prayer journeys or Barrack Obama’s grandiloquent speeches should surely sell like hot cakes. And why doesn’t my magazine yet provide me for free a monthly supply of groceries, home delivered along with it?