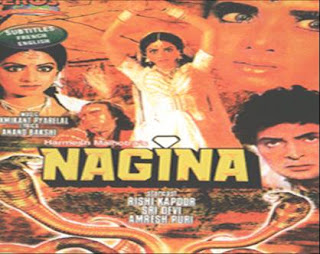 Zee TV has launched a new series called “Naaginn … Waadon Ki Agni Pariksha”. For someone like me, whose childhood, imagination and entire mental development has been shaped by the 80s, the concept of icchadhari Naaginn (a snake that can turn into human and back) was as phenomenal as Bappi Lahiri, Rajiv Gandhi, Gorbachev and Reagan.

But how relevant is Naaginn today? enthusiasts will immediately stand up saying it’s our answer to Harry Potter and show the similarities between Naagmani and the Sorcerer’s stone. They will say, “We Indians were always far better at it, weren’t we?” Of course, any logical personal would be immensely excited at the prospect of 3000 plus episodes of Naaginn menace. For one, today’s Naaginn will be far easily excitable since she will find it hard to escape the nasal onslaught of Himesh which is far more menacing than the Sapera’s bin. And this time around, Naaginns can be marketed in a far better way, Hollywood style, with accessories and contests. With the financial sector booming in , I can even imagine a commodity trading market for naagmanis in the near future. Yippieee, now that most tele novellas get a few episodes shot in , I am hoping to encounter a Naaginn for real.

But hang on, enthusiasts; there are some points to ponder. Can the heterosexual Naag Naaginns survive for 3000 episodes in a global world whose future is undoubtedly gay and lesbian? Come on, even Dumbledore, from Harry Potter, was forced to come out of the closet by J K Rowling.

Also how appealing will be the concept of icchadhari Naaginn to even Indian audiences where there are so many icchadhari characters in Indian television already? The trend that was started by Tulsi’s husband in Kyunki… has been replicated by all serials who have turned the husbands into icchadharis.

Also, we have to be aware of Maneka Gandhi, who was earlier more concerned with publishing revealing private pictures of Suresh Ram (son of Babu Jagjivan Ram) and Sushma Chaudhury. Now that she is all for animal rights, how will she react to snakes being given such a position of privilege over other animals. She will surely fight for the case of an icchadhari chuchundar (rat); how nasty will it get legally?

Moreover in our current world of Discovery channel, Steve Irwin and Austin Stevens have repeatedly shown that insulting snakes repeatedly is a fairly safe exercise with no chance of generational retributions. So will modern day kids give as much respect to the ire of the icchadhari Naaginn as we gave in the 80s? May be, icchadhari Stingrays would have been a better choice.