Gaalis: the next big hope for cricket 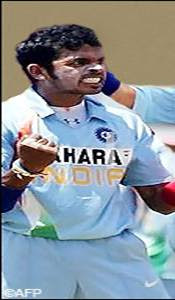 The recent months have witnessed a revival of interest in Cricket in , largely driven by kindergarten style abuses (gaalis) given by players from and to each other. While someone has been called a monkey, others have been called weeds. Even though these gaalis sound hilariously amateur to some people, the Indian media has hailed them as another example of ’s emergence as a global superpower, full of self-confidence with even rustic looking cricketers having English language skills, a great marketing statement for our BPO industry. And that shouldn’t come as a surprise; rudeness is so in favor these days, see Simon Cowell, Janice Dickinson or Gordon Ramsey.

So potent are these gaalis that every captain is thinking to move the “gully” fielder a little closer to the batsmen so that he can give better gaalis. Of course, gully will be renamed gaali position after that. Accordingly, large-mouths like Sreesanth and Harbhajan Singh were bid for much higher amounts in the IPL auctions than players having much better records such as Muralidharan.

So one can say that gaalis in cricket are here to stay. After all, the gaalis offer a great opportunity for advertisers to do product placement. So instead of Harbhajan saying “Tere muh me keede pade” (may vermins infest thy mouth); he can be sponsored to say “Tere muh me keede pade, aur mere muh me Pepsi” (…. May Pepsi infest my mouth). Since each gaali by a player remains in the media for over a month, companies like Pepsi can use these gaalis as a very effective and cheap promotion tool to reach a global audience.

Therefore to promote these gaalis, the Indian cricket board, BCCI, should be showing movies to promising stars like Harbhajan so that their gaalis can have more punch. On the other hand, ICC should come up with a list of pre-approved gaalis which players can use freely without fear of any repercussion. They also need to rank gaalis in the order of their menacing power so that any token punishment for showering gaalis is perceived to be fair. Such a ranking of gaalis would also benefit the general populace. TV commentators should also analyze these gaalis in detail and educate people about their Vedic or Greco-Roman origins. Players with low pitched voices like Sachin Tendulkar should get some voice training so that their gaalis can have more menace. One can also have a "Wisden book of gaalis."

The idea of product placement is hilarious :-)