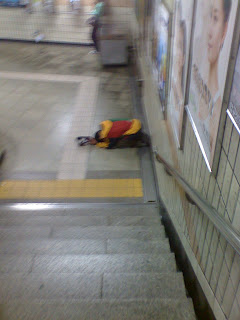 I am back in after more than a year and the most pleasant experience is being able to walk the streets of at night. has an exceptional night life, from the point of view of what one gets to see while walking the streets. The city probably has the widest footpaths in the world and I am often taken by surprise as a motorbike, or occasionally, a car, comes in front of me, driving on these footpaths. The streets are filled with young people, always walking fast as if they are all late to catch the last train, young couples walking hand in hand, young women walking arms entwined. Three musicians are playing loud jazz outside a restaurant and young people stop for a split second to take a picture of this free orchestra on their legendary snazzy phones. A few times, I come across men dressed in business attire lying in these pavements, seemingly drunk, possibly victims of the sub-prime mess. I try to help one of them to feet along with some other passers-by, but can only keep smiling as they keep talking in Korean to the drunkard. Once again I am ashamed at not knowing a language spoken by over 80 million people. All the same, even if I am totally lost in these night streets in Seoul, I always have a feeling of being very close to my destination, perhaps because all the buildings have the same names written on the, Hyundai, Samsung, LG, Woori, KT, SK and so on.

At the Insadong arts and antiques district, the street is lined with shops selling the same artifacts, wooden masks, wooden statues, ugly rubber toys, fans etc. Many of these artifacts dubiously resemble ones from or . But in this world, which one person still calls flat, anything can be marketed as “traditional” as long as it doesn’t look similar to Mona Lisa or Michelangelo’s David. Tourists climb on top of one another to take a snap of a man puts up quite a show with his big hammer beating rice into a paste which is to be made into a form of candy. As some sociologists argue, these traditional lifestyles have become mere touristy rituals in a somewhat globalizing world, wherein both the locals and the tourists take part in these traditional acts for a few hours in a day and then both go back to the same world of Britney Spears, low cut jeans and Whopper Burger.

And then there are the beggars of . Of all the places I have been to, I find poverty in the most depressing. Between all the young people that walk about, dressed to kill, hair done to perfection, one can find an old man sitting in the streets, his body bent forward with his forehead touching the ground, his open arms outstretched with the back of his palms touching the ground. These beggars are there a plenty in ’s subway stations and all seem to have gone numb from poverty as they remain for hours in that pose, so humiliating as if they have fully accepted that they are a lower species than the people walking upright. Some may get shocked at this sight of fellow human beings whose life force has been stamped out by poverty. Will my 1000 Won go any distance in bringing it back to them?

P.S. Posts on my earlier trips to Korea are here and here