Trip to Iran: The People 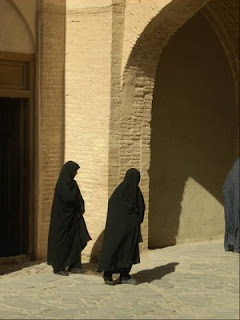 As I joined the queue before the check-in counter for Iran Air in Kuala Lumpur Airport, I noticed that quite a few Iranian passengers were looking at me; some came up to me and started chatting; and some babies started waving and even gave me flying kisses. This got me delighted as it was turning out to be confirmation of what I had read so many times in travel guides and websites; that Iranians were exceptionally friendly and warm towards their guest. But after chatting for a while with these friendly strangers who had surrounded me, I realized why I was getting so much attention. They were just exploring if I, who was traveling with just a backpack and small trolley, could share some of their luggage which probably weighed over a thousand kilos for each one of them. After consenting to share the luggage of one old woman, I was convinced that travel guides are as factual as the bible is on the origin of life. By the way, there is something unique about Iranian queues. They are always funnel shaped.

All the same, my trip to convinced me that some people in can be exceptionally generous. During my flights, strangers came up to me to offer some of their traditional food. And if a restaurant took more time than usual to serve my food, strangers from the next table walked up to me and offered me their food. People walking besides me in the streets, after a finding out my nationality through small talk, would ask if I could join them for dinner.

I am always skeptical about forming an opinion about people based on touristy trips as a tourist’s interactions are limited by several barriers. And the image of and its people has been colored by over thirty years of western press releases; an image comprising of denial of rights to females, religious intolerance, and inhumane punishments for crime. But all this was hardly apparent to me as I toured by myself for ten days across 8 cities in . Women play a significant role in civil society and have high visibility at workplaces. It is common to see women seated by themselves in men’s only metro coaches. Most of the Iranians I came across had a rather cool attitude towards religion and openly claimed that they didn’t fast or pray. They also had no hesitation in denouncing the mullahs and often called the mullahs as “sons of the bitch”. Mosques are rather empty whereas the Zoroastrian fire temples Armenian churches are relatively crowded. Of course, cable TV is not widely available and state run channels are filled with slots for religious sermons. The newspaper talked about an International Quran competition for students but I wonder whether young men, often with wild western hairstyles, bother about these things. Many of them have short porn clips stored in their mobile which they show me with great pride and amusement. Of course, the women showed in these clips are without headscarves.

is a middle income country and despite what is projected in the numerous award winning Iranian films, one doesn’t encounter many poor people in the streets. One common sight in is that of a donation box which is present in every street corner and every shop. These donation boxes belong to state run charities and such is the monopoly of these organizations over charity that common Iranians refuse to donate anywhere else except at those letter box style donation boxes. As a result, I presume that the beggars in , crowded out by these donation boxes, must be having a tough life.

But there is surely enough poverty yet to be eradicated by these charities as is evident from what I saw often in the streets of , a poor person sitting behind a weighing scale. At a street in , I also encountered that mythical sight, a young boy manning a weighing scale, studying mathematics boo, his younger brother sleeping on his lap. Children with beautiful eyes but soiled clothes roam around entrances of historic monuments trying to sell chewing gums. Old men keep waiting near public toilets. They clean the area around the pit with a squirrel like swiftness when you are about to enter and then when you come out, open the water tap for you; hoping for a 5 cents tip. Light eyed Afghan refugees with dirty clothes repair the streets and build apartments for the Iranians. As anywhere in the world, these refugees are blamed by Iranians for all the social malice there. But I believe that most of the fights in happen because of the horrible traffic situation which leads to frequent verbal spats among them.

High inflation in recent times has hit the middle class Iranians also and most of them need to take up two jobs. So during my trip, I meet tour guides who are also professors of history, urban planners and hotel owners at various cities. I noticed that Iranian men had a tendency of wearing the same shirt through the week. Wearing the same shirt is also a compulsion for many young men who had to serve in the army and police, a compulsion for them given ’s unusually young population and the limitations imposed on its economy. As such, the streets, parks, monuments and mosques are filled with young, innocent looking security personnel from the police, the army, tourist police and traffic police. Given such excess, it’s not unusual to find people from all these branches at the same place. Policemen also read news on national TV to keep themselves occupied. I chat up with Mahmoud, a chemical engineer, who was now serving the compulsory tenure in the army. Holding a gun, he was standing at a busy traffic junction in , next to a police van. After we share our knowledge about each other’s film industry, he asks me what I think of the Iranian people and its economy. He asks what extra training he could take so that he could work in and seemed disappointed when I suggested software.

A few words must be mentioned about the tourists in . Since they are culturally so different from Iranians, they form a unique group by themselves. As I went from one city to another, I kept on encountering the same sets of tourists and tour guides. Most of the foreign tourists are elderly couples traveling in large groups as younger tourists avoid because of restrictions on alcohol consumption and prostitution. The sight of scores of Japanese female tourists wearing hijabs is rather psychedelic; but being unfamiliar with Iranian culture can sometimes result in peculiar situations. At my first visit to a mosque in , I attempted to hide any sign of my atheistic irreverence by folding hands to adopt a humble demeanor. As soon as my guide noticed this, he asked me to change my posture as only Sunnis prayed with folded hands.

Unlike most tourist destinations, , to my relief, doesn’t yet boast of having traditional massage. And the touristy shops have limited variety with carpets being the key item on sale. Most of the traditional items on sale such as silverwork, glasswork, or cloth bags have a small “Made in ” written on them. When I realized this, I observed a moment of silence to pay my respect to that Chinese laborer who is so skillful and adaptable to world’s cultures. We have enough monuments dedicated to the Unknown Soldier; we desperately need one for the Unknown Chinese Laborer.

And finally, the Iranians love to talk. One can’t ever escape being talked to in . No matter how fast you walk or how solemn you look, someone will catch up with you and start talking. This particularly led to several uncomfortable situations for me. Unlike white tourists or the Japanese, I was often mistaken to be an Iranian and would be spoken to in Farsi. When I would try to explain that I couldn’t possible know Farsi, they would initially get irritated taking me for a snob. As for true Iranians, when asked whether they understood English, they would always reply in a confident affirmative and then struggle with the first sentence. So it’s a pity that my conversations with these wonderful people were limited to enquiring about my nationality and religion.

As my flight from to took off, I was left wandering how many of the people I had come across would be affected if or were to bomb them. I hope it never comes to that.

hey i wish i could come with you then. it would have been fun. and you're might flattered when you stated that you look iranian. what a narcissist.

funny how you put it - funnel-shaped queues, travel guides and suspicious amiability :)