A trip to Lake Toba, Sumatra 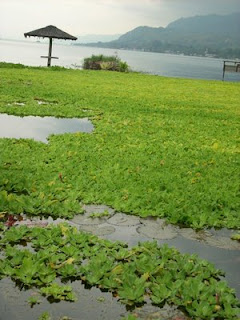 I have developed a certain liking for Indonesia, even though over a million communist party members were killed by these apparently simple friendly people during the early Suharto days. I am always amazed by the amazing density of people in the cities; their simple lives contrasted with the immense diversity in its natural landscape often exhibiting its extreme side through volcanoes and hot springs. This time I headed off to Lake Toba in the central Sumatra Island. The prospect of getting a traditional roadside chalet for 4$ a night was alluring and a quick image search about the place on Google was sufficient to convince me about the place.

My hotel was at Samosir, a Singapore sized island in the middle of the lake which is apparently the largest volcanic lake in the world formed out of an eruption that reduced global human population to a few thousand. Today the landscape is dotted with a few chalets and ship-roofed houses of people from the Batak tribe. The island is sparsely populated with the natives and their rice fields squeezed in a narrow strip between the lake and the hills in the center of the island. Every view in this island is immensely beautiful with lush hills surrounding the tranquil lake waters with carabaos, chickens, goats and churches being the recurrent features. The cool mountain breeze and the balmy sunshine adds to the charm of this place. The carabaos spend most of their time eating in this green paradise, their eyes content while the goats are always seemingly looking for a lost family member as evident from their bleating. The chickens are the dominant species in this place with the cocks walking around regally surrounded by their girlfriends. Often these cocks can be seen chasing the hens; marital rape among chickens seemed rather common in Samosir. As for the churches, there is one every 10 meters or so and catholic ideology is in full bloom here as children vastly outnumber the adults.

On the second day, I cycle over 60 km to reach the hot springs area where there are separate baths for foreigners at 5000 rupiah (50 cents) an hour, probably the cheapest hot springs in the world. Since male and female foreigners share the same bath, quite a few of the local males keep pointing their binoculars towards us from their houses located further up in the hill. Exhausted from the bicycle ride and numbed by the hot spring water, I am forced to flag down a tricycle to carry me and my rented bike back to my chalet. The driver is overjoyed at the 20$ fare he receives and insists that I take several pictures of him and his vehicle. Tired, I return to the restaurant where I had had dinner the previous day. Most of the chalets are family run and they also have a restaurant attached to them. The fact that Indonesia as a whole receives rather few tourists is also evident here as there are more restaurants than tourists in Samosir. As such, the cook puts all her effort in preparing a really memorable meal for the only customer she has for the day. After a delightful meal of chicken curry and rice (there’s one chicken less in the island after that); I return to my hotel to find Batak people singing and dancing to local tunes. There’s something appealing about tribal dances, they have very basic moves which anyone can perform. Stripped of any abstract expressionism and symbolism; these dance moves satisfy every man’s natural urge to respond physically to a rhythm. The locals force me to join them and I don’t have much trouble negotiating the Batak dance moves which essentially is just about moving shoulders up and down with the hands folded near the navel. With not much to do at night and mosquitoes launching their own party, most people get proper sleep in this island. The singers in the hotel continue to entertain a few American tourists by dishing out the usual retro trash of “Lady in Red” and “I shot the sheriff”.

The third day begins in typical style; surfing the internet. The person in charge of the internet café is probably considered a geek in this island and he keeps up to that image by always wearing glasses and a windcheater while seeming perpetually lost in his thoughts. This 50 something man seemed like one who spends most of his time on facebook. After a few minutes of Pavlovian surfing, I check out the local stores. They are all barely stocked, everyone offering just a few packs of biscuits, instant noodles, potato chips, soap and drinking water. One female shop owner offers to take me behind her motorcycle to the waterfall but I decide to venture there by myself. The walk to the waterfall is intimidating as I face the enormity of nature while walking past high hills with the sound from the waterfall becoming increasingly overwhelming to the point where you can think of nothing else. On the way back, I have noodles in a lonely Chinese run restaurant amidst the lush hills. An old man there asks me about all my details and finds it hard to understand how I don’t have any religion. Anyway, he utters the name of Amitabh Bacchan and Shah Rukh Khan to in an attempt to connect with me, a time-tested trick with tourists.

On my way back to Singapore, I have a last look at the modest houses that line the island. For a moment I feel jealous of this people who have both a lake view and a hill view. As t But as I look away, I console myself thinking that at least they don’t have a vending machine in the entire island.

DAY 1 : ARRIVAL – SIANTAR – PARAPAT
ARRIVAL AT KUALANAMU INTERNATIONAL AIRPORT. AFTER CUSTOMS CLEARANCE, MEET OUR TOUR GUIDE/DRIVER WHO WILL TAKE YOU TO START THE TOURS BY USING TOURIST COACH OR VAN. TRANSFER TO THE RESTAURANT FOR YOUR LUNCH. DEPART TO PARAPAT ALONG THE ROAD WHICH OFFERS THE ENDLESS VIEW OF RUBBER AND OIL PALMS PLANTATIONS THROUGH THE JOURNEY. STOP SHOULD BE MADE AT PEMATANG SIANTAR FOR SHOPPING OF LOCAL PRODUCT SUCH AS KACANG TUMBUK “TING TING, TENG TENG”, OTHER SNACKS ETC. ARRIVED IN PARAPAT THEN CHECK IN TO HOTEL. THE REST OF THE DAY IS FREE ON YOUR OWN LEISURE. DINNER WILL AT RESTAURANT

DAY 3 : BERASTAGI – MEDAN
AFTER BREAKFAST. PROCEED FOR TWO HOURS DOWN THE HILL TO MEDAN. VISIT LUMBINI PARK. ARRIVAL IN MEDAN CITY SIGHT SEEING TO VISIT A SEVERAL INTEREST SUCH AS THE MAIMOON PALACE, AL-MATSHUN GRAND MOSQUE. LUNCH AT THE LOCAL RESTAURANT, AND THEN PROCEED TO THE SHOPPING AREAS AS FOLLOW DANAR HADI BATIK EMPERIUM AND OTHERS WHOLE BATIK SELLERS IN MEDAN, INCLUDING TO PASAR IKAN MARKET AND MALLS. CHECK IN TO HOTEL FOR ACCOMMODATION. DINNER AT RESTAURANT.

DAY 4 : HOTEL – AIRPORT
AFTER BREAKFAST AT HOTEL. FREE PROGRAM UNTIL TIME TRANSFER TO THE AIRPORT FOR YOUR FLIGHT HOME.