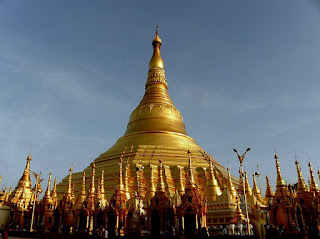 I was relieved as soon as I passed the security counter at Singapore Airport. After all; for the next few days, no one is going to ask me the onerous, meaningless but obvious question, “Why are you going to Myanmar”? And the short flight was according to the modern convention of “thou shalt treat the person sitting next to thou as inanimate object no 2”. The glistening ultra-modern airport in Yangon was filled with Lonely Planet promises of women wearing Thanaka paste on their face and men wearing sarongs (Longi). Soon after I reached my budget hotel that like any respectable Myanmar hotel claimed out loud that it had its own electricity generator, I headed off to the iconic Shwedagon Pagoda.

The Shwedagon Paya summarizes Myanmar. Out here, you will come across the gaudiest aesthetic sense on the planet, a cancerous proliferation of Buddha idols and the friendliest people you may have ever met. While the giant gilded Stupa looks enormous from the streets, it is less imposing from up close. The spire is encrusted with diamonds in all hues; and is also home to thousands of shitting pigeons. The entire premise is filled with funky Buddha idols, many with psychedelic spinning light-discs behind their heads. Shwedagon is as much a social place as it is a religious one and has its fair share of young couples renewing their vows and kids having an intriguing session of hide and seek in its precincts. Right next to them can be seen worshippers on their knees and praying, their facing expression revealing some intense pain. A group of people have formed a chain and are cleaning the floors and stairs. A few white Buddha statues are being vigorously washed by believers hoping that their wishes would come true. At one corner, people are climbing over one another like ants to collect their portion of the free meal getting distributed. A sprinkling of foreign tourists with enormous bazooka style cameras are moving around like lions in the savanna. In the middle of all this, there is something unusually serene about the whole compound that makes even an atheist like me want to stay on and watch life unfold. As I sit down at one corner to soak in the atmosphere, a monk sitting nearby comes up and starts chatting with me. He is learning English hoping to get a foreign posting to a monastery in Singapore or Thailand. He asks me my salary and when I ask him back, he laughs saying its variable because his only source of income is donations. He also advises me to never fall in love with any girl born on Tuesday and I know I can never sympathize enough with those unfortunate girls. As the sun sets, thousands of candles are lit around the stupa as it soaks in the surrounding lights to reveal its true magnificence.

The next day is spent roaming the streets of Yangon which are teeming with life and its sounds and smells. The city has a New York style grid system with numbered roads intersected by long avenues named after Myanmar highlights. The downtown has many colonial buildings but the highlight is the climax of activities happening around the transportation hub near Sule Paya-another gilded stupa. The streets there are lined with clusters of shops catering to every human need. The outer edges have the hawkers selling meat and fish, and as you move towards the Indian section of the city, you come across the vegetable section, the food section and the clothes section. The cloth section has a small signage calling it the Fashion Boulevard, but the wares on display cater to the prevailing preference for gaudiness with an abundance of two colored shirts with the colors meeting at chest level. Sprinkled among these organized chaos of shops are hawkers selling cheap videos, which are all labeled according to their category: “Classics”, “Spiritual”, “Indian”, and the porn ones being classified as “Western Movie”. The crème de la crème of the market are the numerous sex shops which are nothing more than an Indian or Bangladeshi man selling a collection of all relevant sex products in a table of size no more than four square feet. Whatever is your inclination and belief system, with brands like MaxMan and GoodViagra, conjugal bliss seems safe for the time being in Myanmar. The markets are teeming with thousands of people, all with a seemingly complete understanding of the meaning of life. At the fruits section, aggressive hawkers shout at potential customers and almost drag them in to their shop while groups of shy nuns squeezing through the crowd struggle to make their chants for alms heard. And from time to time you see men adjusting their sarongs (longis) in a gesture not too different from male birds flaunting their feathers.

The small gulleys of the main roads are equally interesting and show some specialization with some being lined with old books while some house only umbrella shops. Only in Yangon, can you find books titled “Questions and Answers on Office Work”, “Letters and Essays of distinction Winners” and old copies of in-flight magazines. And there, all of a sudden, I see the Astrology Research Centre Office. I am not sure what empirical methods of research they deploy, but Myanmar is to Astrology what London is to global finance with astrologers of repute charging 30$ for a session and providing their verdict on recorded tapes. The streets are lined with telephone shops which are little more than a table and chair with a large umbrella and two wireless phones. These call booths, often manned by ladies, are usually without customers. So the owner ladies are the ones who can often be seen making calls using their own phones. And then there are the numerous cybercafés, always full of young girls doing video chat next to young guys watching porn.

One must mention the unique delights of the street food in cosmopolitan Yangon. On the streets you can find traditional Indian sweets which are only made in homes, Chinese desserts, countless varieties of fruits and a range of delightful pancakes. The most intriguing are the satay stalls where the vendor typically sits on a low chair next to a 3’ by 3’ platform at the centre of which is the stove. Surrounding this platform are up to 8 very small and low chairs where the young clients sit, the whole set-up resembling a séance with the satay seller as the medium. And the most innovative are the fruit sellers who deploy plastic bags filled with water to swing like a pendulum over the cut fruits to drive away the flies.

While walking is the best way to conquer these mean streets, one would need to use one of the countless varieties of transport options available if you have to move out of downtown. The most obvious are the taxis which are cheap and fairly priced without much need for bargaining. These taxis are all clunky and you can hear all the parts in motion as they ramble on. Uniquely, while Myanmar has right hand drive, the steering is also to the right of the car. The buses are usually jam packed with many travelers clinging on to the backside. The most colorful are the pedal driven rickshaws which have two low back to back seats attached to the left of the driver giving an impression of colorful tortoises giving the hair a chase. And not to be missed is the Yangon circular line, a slow train that goes through many suburbs. Realizing that I was a foreigner, I was being given special treatment onboard by both the railway officials and fellow passengers to the point of being embarrassed. But it’s intriguing to see on the train a mélange of poor people living simple lives yet being happy and content. Hawkers keep boarding the train selling everything from betel leaves, boiled eggs, tea, cold water and the delightful buns topped with condensed milk. The favorite targets of these hawkers are the males who have young girls accompanying them. The passengers all keep joking and talking to each other and give me a smiling nod every now and then. At the Danyingan station, that has a massive village market; lots of vegetable sellers get down, each helping the other to get their huge load of vegetables off the train. And a few stations letter, a group of kids get on board. They are taking potted flower plants for sale to the city and as they place their loads on the centre of the births, we have a delightful garden inside our train.

P.S. Next post on Inle lake in Myanmar; pictures of Myanmar can be found in this link
Posted by Shivaji at 5:23 PM