Of Gods and politicians 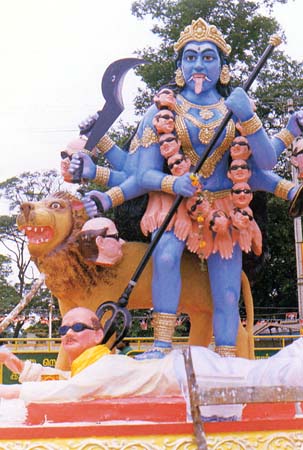 Recently I watched a TV news snippet which showed congressmen carrying posters which had Sonia Gandhi’s face transposed on an image of Kali with the garland of skeletons being replaced by heads of BJP leaders. As a kid, I have found the imagery of most Hindu Goddesses extremely violent and scary; but this one blew me off.

Also in February, AIDMK supporters brandished posters of Jayalalitha depicting her as Annapoorna and even Hanuman. (Of course the AIADMK has come a long way from the rationalist atheist Dravidian movement launched by Periyar). Earlier she had been also represented as Kali and Virgin Mary. (I could only find the Kali image)

Of course there has been mild protest by concerned Hindus over these posters, but I find this concept quite amazing. First, it helps the electorate relate better with the politician concerned. Secondly, it helps to convey the ideology effectively to the voter. Instead of preparing lengthy manifestos which no one reads, the candidate/ politician can just say that he is the incarnation of that God/ Goddess and will replicate their deeds (e.g. making a garland of opposition leaders as in Kali, carrying mountains to build infrastructure like Hanuman). Then, it also helps to give a strong snub to opposition leaders. And most important, it helps the politicians get a facelift. Consider our male politicians for example. Many of them will never get shortlisted for Mr. India Photogenic. But through this concept they can get themselves endowed with far better features. They can get themselves either depicted as Goddesses (possible, if Jayalalitha can be shown as Hanuman), or even if they are shown as Gods, the Indian style of painting male Gods with all-feminine features will ensure that even D Raja looks graceful.

The only drawback – it will not be a concept that can be used by all politicians. If you heard about the Danish cartoon controversy, you know.

P.S. Why should Lata Mangeshkar leave Mumbai? Because, then not only will the flyover get built, her car(s) will also be off Mumbai roads reducing congestion further.

Yes it's all absolutely ridiculous..

Ridiculous, hilarious and troubling at the same time.There's also a temple dedicated to Vajpayee and a Vajpayee Chalisa.