Rapid Moral Force to fight the evil with the good 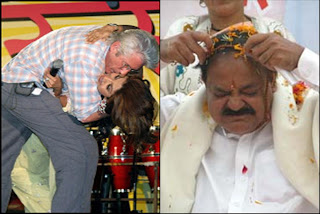 It was a double assault on Indian culture. Our bhartiya nari was kissed in public and a news channel was sheltering two lovers belonging to different faiths. But we are shining and rising; we don’t take no assault to our culture silently; and so our brothers and sisters immediately burnt effigies of Shilpa Shetty and Richard Gere all over and ransacked the office of Star News. Even The Economics Times didn’t cite the kiss affair as another sign of our super success, that not only have Indian men arrived on the global scene (Arun Nair), but also our women are now considered kissable by Americans.

But now that we have so many Indians traveling abroad, many foreigners coming to , and countless global TV channels and greeting card companies; the threat to our culture is real. I doubt what have been achieved by our heroic reactionary brothers and sisters can stand to that challenge. And therefore I propose bringing some organization: to create a state funded Rapid Moral Force (RMF) to both protect our culture and promote it.

This army will employ all these agitated brothers and sisters who have so earnestly been protecting our culture. They will be deployed in all over and their first task will be to demolish all western style toilets. Yes brothers and sisters, those commodes are the biggest assault to our culture. Let the RMF take them out one by one before they start burning down all the greeting cards. The RMF will be armed with clothes, kerosene and lighters to help them burn effigies of any person who violate our culture. They will also have clubs to ransack any institute that affronts our culture. Since they won’t have guns, the RMF will be a totally peaceful force in line with our Indian tradition of non-violence (now, when did that become a part)

The RMF will work together with our news channels which have done a stellar job in relaying any violations to our culture, e.g. by showing the kiss scene over 50 million times yesterday. The RMF will help the busy news channels uncover practices that show the good aspects of Indian culture: Casteist practices for instance as beautifully executed in Khairlanji where a Dalit family was massacred by caste people after they were paraded naked, the women in the family were repeatedly raped, the sons in the family asked to mate with their own sisters and upon refusal, their genitals crushed by stone and tricks, all four killed and then their bodies thrown into a canal (though this last practice was against majority Indian tradition of burning the dead). The RMF will carry out similar incidents in line with our Indian culture and get the news channels to show it 50 million times.

The RMF will also help monitor schools to force-implement good suggestions by the BJP, like surya-namaskara and saraswati vandana. Venkiah Naidu was so right in saying, while releasing BJP’s election manifesto, that a surya namaskara has no religious connotations but is only a practice good for our health. The RMF will help everyone get the slim waistline of Venkiah Naidu.

You may ask why we need a state funded RMF? Come on, have you ever spared a thought for our reactionary brothers and sisters who have to take time off their jobs to go out in the street and burn the effigies of the morally corrupt? At the least, we lazy citizens need to compensate them; after all they ensure our daughters will be saved from a Richard Gere kiss in such an awkward pose thus protecting them from a slipped disc. In fact I propose a Param Moral Chakra (in lines with Param Veer Chakra) for outstanding acts of bravery by RMF soldiers, acts like smashing a window while climbing over a gate with pointed metal.