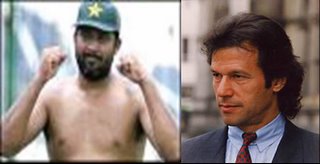 Recently, Inzamam lashed out on former Pakistani cricketers for “unleashing an unwarranted tirade against his side to serve their own nefarious purposes”. His plight is shared by all sportsmen, as all over the world, sportsmen have been subject to criticism from former sportsmen. But does Inzamam have a chance against all the former Pakistani cricketers? The answer is a resounding “NO”. Why? Because former cricketers have all the advantages while he has none.

Secondly, the former cricketers have the advantage of years behind them to improve their English (Kapildev is an exception). So while Inzy uses the word “is” as a verb, noun, conjunction, adverb and adjective, people like Imran Khan now even the meaning of words like “Querty”. As a result former cricketers can communicate their tirade a lot better.

Former cricketers also have the advantage of history and limited capacity of public memory to remember. So it’s not surprising to find people supporting criticism of Inzy by someone like Arun Lal (despite Arun Lal having played 16 tests, 729 runs, Avg: 26; as against Inzy’s 102 tests, 7621 runs, Avg: 50.13).

But is there no hope at all for Inzy? There is. After all, he will also become a former cricketer in a few years. All he needs to do then is to remove the “is” from his vocabulary and get set go against the then current cricketers.

well said. Constructive criticism is well and good. But ridiculing players for their mistakes just because they got a microphone in hand is unpardonable.