The genocide monuments of Cambodia 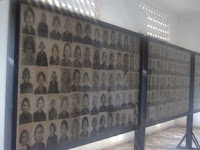 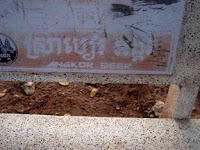 The Tuol Sleng genocide museum and the Choeung Ek Killing Fields are the most popular destinations in . The Tuol Sleng museum is housed in a high school which used to serve as the S-21 detention prison during the Khmer Rouge regime and puts on display the crude instruments used for torture, the cells, skulls of the dead prisoners, and their numerous photographs. The Killing Fields houses the site for mass graves of those killed, and a Stupa that has stacked up skulls of the bodies recovered from these graves. Though the extent of atrocities is denied by the Khmer Rouge, historians largely agree that 1.5-2million were killed during the 4 years of their rule.

I found a few things interesting while doing the tours of these places. As I went through the displays of photos and skulls at Tuol Sleng, I started finding the displays a bit monotonous after about an hour’s time; as if I had had enough. I am sure many other visitors would have felt the same; especially in hot Cambodian afternoons. But how long did it take for the actual prisoners to get bored and feel that they had had enough? When did they start missing the aircon, the electric fans, and other comforts of normal life? Was I trivializing their trauma with my snap-happy visit or is it the way that it’s meant to be?

And though is still far from rampant commercialization, it hasn’t been able to escape its lure fully. Tuol Sleng has a few shops inside selling souvenirs and audio-video material related to the genocides. How satiated can one feel after visiting the museum and then buying a “world-peace” t-shirt? The most bizarre display was commercials for the local Angkor Beer marked on chairs in the Killing Fields. Was I right in even paying for the entry ticket to visit these monuments of human cruelty and misery? I think I was keener on not missing out on a known tourist destination and spending “fruitfully” the few hours I had in .

And surprisingly, while there were countless Japanese and Korean tourists at the temples who had come to explore their Buddhist heritage; there were hardly any at Tuol Sleng and Killing Fields? Was it a classical example of religious self-centered thinking or a result of whetted appetite from unique horror films coming out of these two countries?

so did you get yourself the world peace tee..?!!

No man; didn't get it. But try to see if you can arrange a trip to Cambodia.