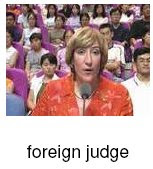 Last week, I happened to watch the “CCTV Cup” English Speaking Contest on CCTV. About 20 finalists were chosen from university students from 30 provinces of . As per the format of the finals, each contestant had to speak for two minutes on a pre-assigned common topic for 2 minutes which was followed by a brief Q&A session. After this, the candidates spoke impromptu on a random topic for two minutes; following which three expert debaters took an opposite stance on what the contestant had said on the impromptu topic and literally grill the contestant. And all this happens in English. The contestants are judged by a mix of ten Chinese and foreign judges. The presence of foreigners is also used in a funny way to promote the show (see picture and text below it)

The show itself is very interesting; the topics for discussion covered important socio-economic issues which are relevant to any developing country: Reducing damage to environment while ensuring growth, Breaking up of families as individual choices get more respect, Growing wealth for a few in a society that is largely poor, Developing creativity in an education system that is churning out millions for the outsourcing industries, etc. And since contestants were speaking impromptu in a foreign language, they often spoke out their hearts, with the three debaters with a mandate to only oppose ensured that the other perspective was equally highlighted.

The contest is especially relevant in as it tries to catch up with in industries where fluency in English matters. So high is the demand for learning English that sessions are being administered in large stadium to thousands of students. Also there are reports that more people are studying English in than in the . While in the , during the American Association for the Advancement of Science meeting last week, experts expressed deep concern that half of worlds 7000 languages will die out by the end of this century. The number of languages spoken in itself has halved from 100 at the beginning of the 20th century. As the supposed “Curse of Babel” fades away due to globalization, we are also losing subtle knowledge bases implicitly associated with these languages facing extinction. May be Bollywood has a solution with their habit to put in a few words or accents from other languages whenever characters from non-Hindi regions speak. Unfortunately, they are limited to “isssssssssssshhhhh”, “Bondhooo” and “Aiyooooooo”.