As my flight was landing at Ho Chi Minh City (HCMC), I was mesmerized for a while, wondering whether I was landing at Mumbai by mistake. There were racks of slums all around the airport that looked exactly as one can see while landing at the Mumbai airport. The similarities ended there as from inside, the airport looked much better than any Indian airport. But just as one gets out of the airport, one can feel what HCMC is all about; a place like Kolkata with narrow streets, wide but broken pavements, sweltering heat, communist flags propping up everywhere, millions of people, and chaos. However, two things set HCMC apart. First are the shoals of two wheelers coming from all directions resembling a massive attack by sardines, and secondly a tropical jungle of telephone and electric wires as if some technologically-backward aliens have cast fishing lines in this city to catch some humans for crude experiments.

The city rises early and goes to bed early with typical office hours being 7AM to 4PM. And after 11PM, the whole city goes to sleep except for the pimps and a few tourists. The pimps, as is the case with most Vietnamese, are not well versed in English, and are often at a loss for words when they accost a tourist.

As soon as you enter , the country provides some instant gratification. Just exchange 60 dollars and you will become a millionaire in the local currency. This satisfaction soon fades as you end up spending much of it for your first meal. Yes, is expensive with everything costing at least three times more than in . However, I was pleasantly surprised that there were hardly any signs of abject poverty in HCMC and there were very few beggars. And the whole city is reasonably clean. And then there are the city streets. If you are on street A and reach a crossroad, you can take it for granted that the street to the left or right will be named street A from that point onwards!!! Straight lines don't continue for long in Vietnam, probably a legacy of their guerrilla history.

The whole country also has an air of self-confidence about it. And between all the chaos, one gets the feeling that the Vietnamese know how to keep themselves going. When we explained our desired itinerary to a local tour operator, she said, “Neither you have any friends in this place nor you know anything about this place. I know it and I know this place (So shut the **** up and listen to what I propose).”

The Vietnamese are justifiably proud of being the ones to have humiliated the French, the Americans and the Chinese (though always with outside support). But I also respect the Vietnamese for their two most outstanding innovations. First are the toilet signs. Not many can appreciate this, but some people like me, with both arrogance and physical myopia, often get confused between toilets meant for men and women. To me, the symbols outside toilets: of man with the spread legs and a woman wearing skirt, appear quite similar unless I look from real close-up (that is embarrassing). To avoid such confusion, the Vietnamese typically put a picture of David Beckham outside men’s and some female supermodel outside women’s. Simple and amazing; biggest problems of life solved.

The second most important innovation is the snake wine with a dead venomous snake with open hood and a scorpion placed inside a bottle of wine. The wine is not poisonous and is apparently helpful in enhancing potency. And I can perfectly understand why the wine works. Even if the wine is just a placebo, the men who dare drink such wine deserve all the women’s attention.

Interestingly, apart from the symbolic expressions of communist ideology: flags of international communism, occasional agitprop billboards, and the ubiquitous posters of Ho Chi Minh; one can hardly sense that Marxist-Leninist ideology has been at works in the country for so long. The communist government also has a relaxed attitude towards religion. And Christianity, the religion with the most powerful gods now (courtesy western dollars for proselytizing), has established strong presence with some parts of Vietnam having the highest density of churches I have seen anywhere. But that should not come as a surprise. Post , has emerged as a darling for capitalists after and . And reprints of agitprop posters are being sold across in art shops with each costing over $10. Now, how would have Pavlik Morozov reacted to that?

Some pictures of below: 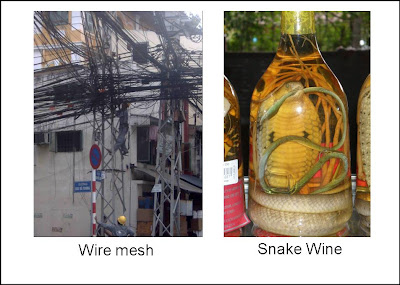 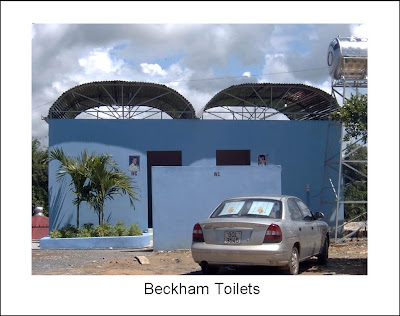 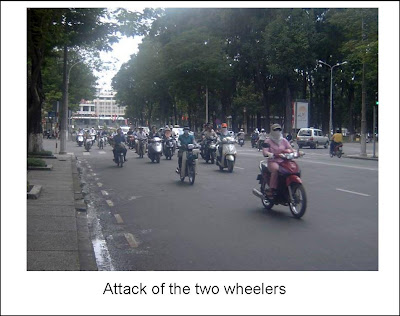 Good post! Am a regular and this time can't resist to comment why I follow your blog, religiously! The posts are simple and interesting , not cluttered with "look-how-much-i-know" kinda words. Thanks for ur few minute entertainment

Damn! I seem to have missed the snake wine. :-) Funnily, Vietnam was the closest I found abroad to the look and feel of Indian cities. Re: your comments on the tangled electric cables overhead, actually you see the same sight in many North Indian cities including old areas of Delhi and Noida.

Thanks Shantanu...
Indeed several places in Delhi have such tangled up wires, but the wire mesh in HCMC seemed to be something else altogether.
I would agree with you that many of their towns resemble Indian towns, especially towns in North-East India where I was born and brought up.