Samantha Fox and fall of cummunism: the agitprop case

While in , I came across a shop selling agitprop posters. The cheapest poster was worth $10. No wonder, revolutions stopped happening a long time back. But there was a time when posters of clenched fists, intense eyes, and the supreme leader would need to be taken seriously.

Agitprop posters were very similar across the world and had a few set patterns. Since they were targeted at the masses, they had to be dumbed down. No hidden messages, no abstraction, no exceptional faces. Juan Miro would have died a beggar in a communist society. Typically these posters would show a group of people including women and children, all men and children wearing uniforms and caps, with intense faces, seeming to be part of an extremely serious gameplan. There would always be a sense of action, with fingers pointed at a certain direction being a recurring theme. Some dumb sounding slogan would be written at the bottom; either hating a target class (reactionaries or country (); or promising a shiny happy future by calling people to action. Sometimes the benevolent face of the supreme leader would dominate these posters, especially when the posters needed to be produced in a short time, or when a good artist was not around, or when the sponsors of the posters needed to curry favor with higher forces.

The town where I was born was under red power for years. And there was a certain excitement we had when the party people would come to spoil the walls of our public housing with new posters. But in the early 80s, agitprop was being replaced by something bigger and bouncier. Large posters of Samantha Fox were cropping up almost everywhere, outside photo studios, restaurants, cinema halls. “Naughty girls need love too” and “I Wanna Have Some Fun” were replacing slogans like “Down with Imperialism”. Even we kids could identify more with the new slogans and this new supreme leader and the party workers could no longer keep up with this onslaught. Within a few years, Samantha Fox led to the fall of Berlin Wall and global communism. All the same, pasted below are some of my favorite agitprop posters. 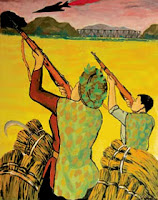 Vietnam: Shooting down planes while at work
Posted by Shivaji at 8:09 PM