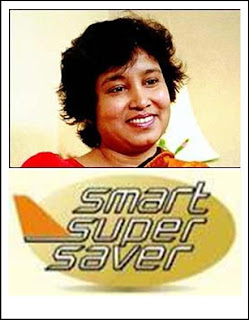 Taslima Nasreen has been running all over for cover. Vanguards of Muslim interests protested her presence wherever she went; in Kolkata, and Jaipur. So much so, that her travel agents must have bought for her dozens of Indian airlines super saver packs (it offers 16 tickets for travel to anywhere to at super cheap rates). Incidentally, the vanguards of Muslim interests have also bought these super saver tickets. A few Hindus have also supported her ouster, taking her to be one of the many so called “illegal” Bangladeshi laborers in . As expected, the Indian Marxists, the most religious people in the world, have been the most vocal in demanding the cancellation of her visa.

But many people have also come out in her support. The most vigorous support for her stay is expected to come from landlords in Mumbai who are salivating at the prospect of a ten month deposit in case she rents a house in Mumbai. And BJP, the party of landlords, has accordingly come in her support. Intellectuals and liberals in Kolkata have also organized marches demanding her being allowed to return to Kolkata. This was no surprise as Kolkata is supposedly the most liberal and intellectual city in India courtesy its being the most populous city in India (remember, in India only children below 4 years of age are liberals, so more children at a place, more liberals there). Healthy advice has also poured in from several quarters asking her to take up football since that’s the only area where non-whites are welcome in .

In the mean time, Indian tourism department has begun a new damage control campaign by showing an elderly white couple having a great time in . Yes; don’t worry; our elephants still salute Caucasians with the same fervor. And the usual guest for talk shows and news channels are having a ball repeating the Indian cliché of welcoming all guests as Gods. The only sufferer so far has been the streetside seller of pirated books. Initially he had made good money with a sudden demand for Taslima’s books, but now he runs the risk of being burnt down by Muslim fundamentalists. So he has replaced stocks of “Lajja” with “Seven habits of highly effective people” and “Rich dad, poor dad”, books equally popular with liberals and fundamentalists.

What about the common man? He is doing the usual stuff, praying, having food, excreting, sleeping and reading about cricket when he gets his newspaper.