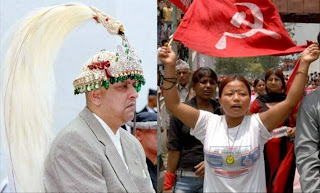 Contrary to all projections by mainstream media, Maoists seem to be well on their way to power in , through a democratic process. And they have already announced that the monarchy will be abolished within three weeks and the palace wealth nationalized. It remains to be seen whether “The Prachanda Way” will transform lives of the common Nepalese who live in wretched poverty and face severe caste-based discrimination, but it is certain that the days for the king are numbered.

What awaits the king? Given the prospect of international pressures, it is unlikely that he will meet the fate of Louis XVI. But Maoists will surely think twice of letting him hang around in . They must be wary from the case of that wily fighter Sihanouk who kept on shifting sides and coming back to power in . It is also possible that the common population may get wary of Maoist secularism and opt for the ritualistic comfort of a Hindu king. Therefore, may be the Maoists should think twice. Kings, when they are not sucking blood, could serve quite a useful purpose. The Maoists could maintain the King as a useful if ceremonial figure just as the military dictator Sarit Dhanarajata used Bhumibol in to maintain legitimacy. Also, if the public relations and myths of the royal family are nurtured carefully, as in , they can generate a steady source of employment and income for common people through tourism and media gossip in the poor country.

And what are the king and his palace troupe thinking now? Are they having great feasts anxious that the food of future may not be so lavish? Have they already transferred most of their wealth to overseas bank accounts? Have they already booked their tickets to fly out of their country? Have some of them already started memorizing Mao’s “Little Red Book” as they prepare to switch loyalties? Or have they bought huge life insurances?

Well, all of them will probably find easy refuge in , used to housing feudal lords and lamas. Anyway is in the trickiest position, having backed the king for so long, and then supporting the democratic process, only to see Maoists come to power. But till the king of the hill escapes, he could surely be asked to give helping hand to cultivate rice, with all the inflation around.