Mannequins, the species of the future 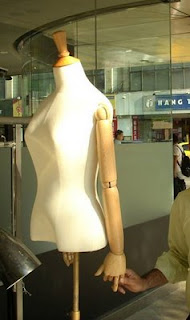 While much research has been done into chimpanzees, bonobos and orangutans to understand human evolution; surprisingly little attention has been given towards Mannequins, ones closest to Homo sapiens. May be that’s because unlike humans and the other animals, mannequins are hardly facing any threat of extinction, courtesy the algae like spread of shopping malls worldwide that act as protected reserves for these mannequins. And after all, mannequins live a life more haloed than the wealthy and the privileged, getting to wear the gilded clothes and jewelry for much longer than their actual owners. Even in communist countries, there are more mannequins than statues of the local communist strongman.

Mannequins, as a species, are rather homogenous. Their facial and body features resemble those of Caucasians. However, they lack body hair unlike other primates. No one has ever seen a mannequin with a beard or even a moustache, let alone armpit hair. While mannequins do have hair on their scalp; of late, a mysterious disease has led to mass balding of mannequins including the female ones. Another mysterious disease has also led to mannequins being born with deformed bodies. So many mannequins can be seen without heads while some have only thighs and posterior (used to display shorts and Bermudas). Many mannequins including their infants are also genetically predisposed to have a permanently aroused expression.

Once can argue that mannequins are more evolved than humans as they are all well at home with the Pradas and Guccis. Their elegant look of contempt as they enjoy their favorite pastime of staring over the head of window shoppers gives further proof of this. No wonder, they have been mostly vilified in popular culture by humans, allowing mannequins guest appearances only in horror movies and weird album art for rock music. All the same, they also clearly represent the inherent oppressiveness of human societies; no mannequin looks at another mannequin. Thus ignoring the presence of one another, they provide evidence for Sartre’s theory in his work “No Exit” that hell is other people.

So next time you come across mannequins, please treat them with respect. Resist your temptation to play with their bald heads. Refrain from looking under their skirts. Rather hold their hand, asking for guidance, as I have started doing (see picture).

The last sentence is hilarious!