Any traveler must be thankful that the cultural shock of going to any unfamiliar place is now well cushioned by the airports in these places with their all too familiar landscape of Gucci, Chanel and Duty Free shops. So was the case when I landed in , but thankfully, world is yet to become flat again. And Taiwan has its own surprises; skimpily clad beauties selling betel nut from glass rooms set up by the highways; garbage vans that keep playing loud midi-style classical music to warn of their presence; toilet themed restaurants where food cooms in a potty pan; and Taipei 101, still the tallest building in the world.

The 101 dominates the skyline of as well as conversation among locals and tourists who frequently use it as an allegory for male libido in their jokes. The locals also have their share of fun with me by giving me a Chinese name, “shee hwa ji da” which could mean “Chinese people have arrived” or “Chinese chicken has arrived”, based on the way the “ji” was pronounced.

Taipei has a certain rust belt feel about it, yellow taxis, old brown box buildings packed against each other, and crowded streets give it a feel of old time Chicago. And the taxi drivers in are the most talkative I have come across. In the course of a verbal onslaught, the same place was touted as the best place and worst place to be visit by the same taxi driver as he took us there. But a place certainly worth visiting is the Yehliu coast with absurd rock formations in the shape of a queen’s head (see picture), nipples and sandals. Then there are the numerous hot springs in and around Taipei where one can see old, fat, and naked people, immersed till neck in the smoking water, all looking in one direction to some distant future. There is also the night market of , a teeming, bustling, and stinking place, courtesy the “stinky tofu” that can be appropriately described as a “delicacy with the aroma of human feces”. The night market has enough material to meet the needs of an alien if she were to drop by. It also has almost everything a human being might need, dancing coke cans, fancy self-protection gadgets, and an abundant collection of Japanese porn.

The , with its treasures from the is worth a visit. The most intriguing display is that an ivory art piece consisting of 17 concentric spheres, carved from a single piece of ivory in an astoundingly ingenious way. An off the beaten track place is the Taipei Story House with its collection of icons of practical gods such as Pigsy, the deity for the sex industry.

Before I left for , I had been curious about the nature of society that exists there, a region inhabited predominantly by people who fled from the advancing communists in mainland . The island, therefore, should have been constituted entirely by the bourgeois and their parasitic monks. As such, I was intrigued to find the presence of cleaners, beggars, betel nut beauties, and street-side vendors in the same proportion as required by our present conception of society.

Overall, seems to be a very friendly place, where locals probably utter “Thank you” more times than they breathe in their life. But just as I was about to give the Taiwanese my worthless certificate of being a homogenously lovable place, a stranger walked up to me and my friends and commented something nasty about me being from Indian race. So I need to go back to , just to visit the Taipei Story House again, to find out if there is a deity to protect against racism. 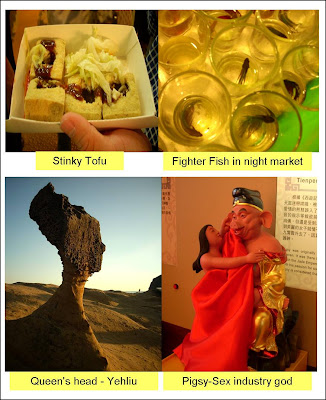