Trip to Iran: The Food 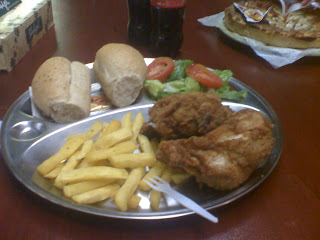 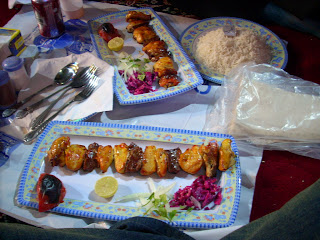 Yes, 'n' how many kebabs must one man have,

Before he thinks KFC is best?

The answer, my friend, is blowing in

And according to me, the answer is 12. This is because after 12 consecutive kebab meals in , I decided to go for fried chicken. Unlike the protagonists of the bestseller travel stories or popular travel shows on TV, I was not blessed with a personal invitation from a local household to have a meal with them. So my experience about food in was limited to what I could find on restaurants; and that’s another name for Kebab kingdom in where all items in the menu have been knighted with a kebab suffix. However, I am not saying that the kebabs don’t taste good and it’s one of the best ways to handle meat on its way to the gutter through the human body. Also, a very redeeming feature is that kebabs in are usually served after the skewer has been withdrawn. I found this immensely convenient as whenever I have had kebabs before, I had a feeling that I might send a few kebab pieces on a failed space trip when trying to separate them from the skewers.

The other key component of food in is the bread that looks similar to the Indian bread or naan. However, I had a feeling that they don’t get the respect and glory talk from the waiters as they do in . Large stacks of bread lie at corners of grocery stores. Unlike South Asia, Iranians have these bread cold and a common sight is that of people crossing streets with dozen or bread placed over their arm, exposing the bread to the infamous pollution of . At restaurants, they are served like tissue paper, and a lot of it is wasted. But they form a part of every meal. During breakfast, people have these breads with jam, butter or cheese. During lunches or dinners, they are the first thing to be served and people have them like starters without any other accompaniment. The breads mainly differ in terms of their thickness, but interesting variations may be found in street markets, e.g. bread stuffed with date paste. I came across a press report that wanted to barter oil for rice and I could understand why.

While kebabs and breads may dominate the entrails of a tourist in , a few other options are also available for lunches or dinners. Typically, after the packet of bread has been served, there is option for soup, salad or plain curd. Typically, the salad consists of an assortment of basil, spinach and mint leaves; other combinations involving broccoli, potato, peas, olives, beet and pickles are available too. A few grilled tomatoes and half lemon served along with the kebab can be quite delectable. If one doesn’t want to have kebabs, a few options such as beef stew or vegetable stew can be tried. These stews have more than a fair share of aubergine dumped into them, but could be rather bland for a person whose tongue has been trained in the fiery land of spicy curries. Often an unbelievable quantity of rice is served along with the kebab or stew; so much that was forced to ask recently if it could barter its oil for some rice.

As for drinks in , sweet tea without milk is extremely popular. Another traditional drink is the doogh which is a yogurt drink similar to buttermilk. Coca Cola and Pepsi is common as is Zam Zam Cola, the Islamic version. When it comes to desserts and candies, the most popular candy is the Gaz from , which tastes a bit like marshmallows garnished with nuts. Traditional Iranian ice cream, like Turkish, is rather unique and gives one a feeling of having eaten cold molten chewing gum. Faludeh, a kind of vermicelli mixed with sugar syrup and lemon is rather tangy.

Restaurants in are of two types: fast-food ones and those that don’t brand themselves as fast food which means the kebab serving ones. When it comes to fast-food, the options available are Pizza, fried chicken and hot-dog. There are no McDonalds or KFC in given its special relationship with the ; but local fast food restaurants try their best to provide that global connection by displaying large posters of KFC meals all over their walls. In contrast to their name, fast food restaurants in take more time to serve than normal restaurants. And instead of cardboard or paper packets, the fried chicken and the potato fries are served on steel plates with steel cutlery.

Food is relatively expensive in . A kebab meal could easily cost $6 or more in an average restaurant. A small cola bottle is around 50 cents. But still, the men of eat lavishly and the oil and meat rich diet makes men fat. The fashion conscious ladies somehow miss the trap.

Mouth watering and well written. Gives me a complete perspective of daily food in Iran!

It must have been boring eating the same thing again and again. Would have expected they have varied cuisine. Oh well, now I'm quite thankful in Singapore, or else it would have been constipated eating experience all the time ;)