Trip to Iran: The Places 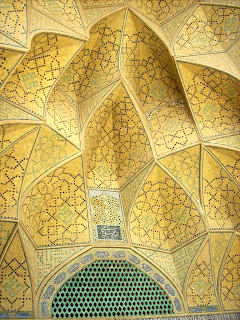 Whenever I mentioned to anyone that I would be going to , the response would be a short “Why”. And having come back from that place, I can understand that there are enough reasons why one should avoid as a holiday destination.

Of course, there is this inconvenience for women having to wear scarves and long sleeves and men being barred from wearing shorts in public. But more importantly, there are enormous challenges when it comes to eating out in as restaurant food there means beef kebab, mutton kebab, chicken kebab, mix kebab, royal kebab, special kebab, and jumbo kebab only. And after 20 consecutive kebab meals, I felt like taking a somersault dive into a pool filled with curry or soup. Another issue with is the system of public toilets. Being an Islamic country, there are no urinals for men. While this established potty parity between males and females, it also meant that every time I had to urinate, I would have to smell the lower intestines of the men who have visited the place before. And then there are the other oddities about . For instance, the time indicators at traffic signals obey divine forces rather than physical laws and take abnormally long time to display the next second after another. There are the energy saving lights that go off when people approach them and crude traffic lights that are not fixed on poles but kept on ordinary plastic chairs kept at the side of a road.

But if one can brave all this, I would recommend as one of the must see places in the world. Iran offers amazing diversity and in a single day’s travel, one can see rain forests and parched deserts, witness heavy snowfall and baking heat, walk inside glorious mosques and Zoroastrian temples, shop at thousand year old bazaars and Rado store, and talk to shia mullahs and skinheads. As every moment provides a photo opportunity, one is overwhelmed by this flurry of sights, sounds, and smells. At night, sleep comes in early as the brain begs for more time to make memories out of these experiences.

is most well known for its historic monuments and I encountered so many during my trip that soon I started mistaking garbage dumps as historical ruins. The ruins of the Achaemenid palaces in require some imagination to figure out how grand the whole complex may have been before Alexander destroyed it. One does get an eerie feeling walking through the compound which had been built by humans over 2500 years ago. All the same, the Achaemenid rulers were surprisingly unimaginative with their names and kept choosing from Cyrus, Darius, Xerxes and Artaxerxes. The same habit has continued to present day where almost all streets, train stations, airports and squares in are named after Imam Khomeini.

Then there are the countless mosques of . Given the abnormally young population of it is certain that their infrastructure will start cracking up as is already evident from the horrendous traffic in that beats even Mumbai by some margin. But one infrastructure that is completely prepared for this demographic challenge is the network of mosques in the country. There are so many mosques in that many are filled only by tourists or at most by four to five worshippers. The pick of the lot are the Sheikh Lotfollah Mosque and Imam Mosque at Esfahan and the Jame mosques at , Esfahan, and Kashan. As one walks inside them, the elaborate mosaic tilework, the high roof of the dome, the towering minarets, and the echo from the domes, leave one mesmerized taking her into a psychedelic spin.

There are the king’s palaces and rich men’s houses in Kashan and dating from the 19th century. Interestingly, many of the rooms in these complexes are completely covered with mirrors. May be narcissism was an acclaimed behavioral trait in those times in . There are the historic bridges in which look beautiful when lit up after sunset. And several tastily done parks, clean streets, and tree lined boulevards make taking a walk in a very pleasant experience, provided it’s not scorching afternoon. Every few meters in the streets, there are drinking water booths and billboards having quotes from the Quran. These quotes are both in Farsi and English but the translator seems to be a person who got excellent grades in Middle Age (Shakespearean) English while failing the spelling test. May be the weird translations are intentional to prove that only Arabic was the language of the gods. (I am not sure if the Farsi texts made sense)

The streets and alleys are lined with numerous bazaars with medieval era walls and roofs which are still untouched by Gucci and Chanel (except in northern and airport). The bazaars sell everything from pink wigs, diode valves, ammeters and rifles and calls of Chand (how much?) come from all directions. The shops again show a lack of imagination when it comes to naming and I came across shops like Far away International Call Shop, Friendly Internet Café and Touristy Tour agency.

In our present political systems, it is unlikely that tax money would be used by Governments to build anything as grand as the Achaemenid palaces or the Safavid mosques. Moreover, the magnificent sights of will disappear one day, if not from Israeli missiles then from earthquakes which have already vandalized the historic city of . So if you get a chance, do consider as a holiday destination.

We are SIFY www.sify.com India's No 1 internet portal.
For the fourth consecutive time we are partnered with Sony Media Pvt Ltd as Online Partners for Indian Idol Show that comes on air during week-ends.
As a part of our internet promotion we would like to host your blog URL in our website
http://indianidol.sify.com/
Hope you too will definetely wish to have link exchange (also content exchange on request)with us.
Revert us with your opinions @ indianidol08@gmail.com.

i'm sure that the minor discomforts are small in comparison to the inspiration and learning the trip has given you. yes i agree with anuradha that this is enviable. to walk where the kings of a great civilization once graced, it's almost tantamount to a quantum leap experience.