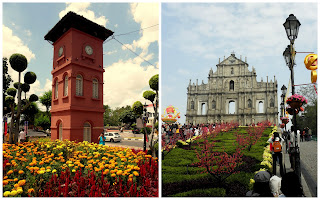 My last two weekends were spent cities steel well soaked in their colonial past: Macau and Malacca. Both the cities have been shaped through hundreds of years of European colonialism and had been great maritime centres for centuries, exposed to interest and greed of millions of foreigners from all regions in an age without visas. While both cities still struggle to emerge from the vices of colonialism; read exploited economies, mutilated family histories, and remnants of self-righteous foreign religions, history does apologize in small ways by converting old architecture into money making avenues for rickshaw pullers, python displayers, and ice cream sellers.

Macau, albeit known for its gambling glitz, has a rather quaint side to it in its historic quarters. The Portuguese colony offers the usual colonial architectural haberdashery of pastel colored buildings, large wooden planked windows of bright contrasting colour, cobbled roads, bronze sculptures , numerous churches, and numerous alleyways. While the imposing buildings are in accordance with standard Portuguese design and the street and house names are in Portuguese, the people living in these settings are almost all Chinese. So you have old Chinese ladies lounging around Largo do Senada (Senate square) and cramped Chinese shops selling lanterns, preserved pork and Portuguese egg tarts in the road leading to San Paolo Cathedral. Apart from these, the historic peninsula is mostly in shambles; dirty roads with broken pavements, old noisy cars, filthy grimy looking apartments with small windows, temporary shops, restaurants fully exposed to traffic fumes, loud machine workshops dotted all over the city, and a population that is old well in the need for retirement. The only young faces in this city belong to young Filipino migrants working in the hotels who have moved over to Macau in large numbers. As for the gambling pilgrim sites, they are odes to architectural nightmares in the form of huge golden lions, oddly shaped gilded hotels, monstrous rock cut venues. All this make the Macau experience comparable to being thrown in a giant washing machine with its lid shut, together with clunky metal parts, colorful candies, small cobbles, thousands of fragile and grumpy old living beings, and equal number of young apprehensive aliens, churning in a slow, uncomfortable spin.

As for Malacca, the descriptions are almost the same, except that the weather is much more oppressive owing to its heat and humidity. Pastel colored houses line the smelly river from the days when urban planning was yet to be an academic subject and Bahaus didn’t impose its monoliths. Except for the tourist crammed Jonker Street, the numerous narrow alleyways seem to be under a spell of numbing siesta. At the numerous barbershops, the barbers as well as the customers open their mouths as they take naps together. What might seem as life in slow motion is actually their attempt to fast spend away lifetime for what can kill time best than sleeping with friends. Again, expect for Jonker Street and the main square, the city is largely inhabited by old people who blend in perfectly with the ageing architecture. As for Jonker Street, it is a melee of cramped shops, all selling more or less the same varieties of tourist trinkets, what out of its context becomes exotic. The numerous museums deal with everything from one for “Endearing Beauty” to “Tortura 2”, a Madame Tussaud style kitsch.

Walking through the cobbled streets of these historic cities, whether its Malacca or Ouro Preto, does give an eerie feeling when I consider that my foot steps are falling on the same bricks stepped on by people hundreds of years ago. Like those entities without any mention in history books, there will be no trace of me yet. Unless of course, someone ten thousand years from now, digs up my airline loyalty card, as an elegant window to how humans live now.

Pics of Malacca and Macau

Ah both cities have this old world charm that I am a sucker for. I also happened to visit these cities during their respective off-seasons so it was a joy to ramble through the historic lanes without the menace of camera-toting, loud tour groups.

I am certainly not a fan of the Casino strip in Macau and am convinced that it is only a matter of time before the goodness of the quaint streets and plazas will give way to monstrous glass-and-chrome towers.

Malacca, OTOH, I'm sure, will continue to maintain its slower, more relaxed pace for several years to come.

I wish to know what you find common in both of them beyond being Portuguese settlements in the past.

As a Filipino I always thought their being a former Portuguese settlement is so hyped up. In the Philippines there are so many churches even more antiquated and beautiful than these mere church effrontery - the historic churches there are real churches, not just the facade! That and many much more influence that has seeped through almost everything...

Again, a witty composition. Your description of the place is also comely. Interesting that you chose characterization of Malacca through the barber uncles - those alleys are indeed grotty, tired and sleepy.