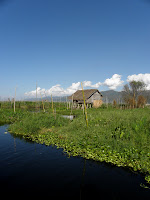 Inle Lake is a luscious cake with many layers of delicious flavours; first the big blue sky, then the olive hills at the background, then a thick layer of soft green floating plantations, and finally the deep blue water nonchalantly reflecting all these as if it has better wonders inside itself. Along the lake, one comes across the Inthein village with the 1054 alligator-snout shaped stupas, bustling weekly markets, jumping cat monasteries, numerous traditional workshops, and fishermen rowing with their legs. The approach to the ancient stupas at Inthein probably houses the largest supermarkets for antiques and handicrafts in the world, but no one seemed to be buying anything. The shopkeepers therefore keep playing cards listening to heavy metal songs. The jumping cat monastery is probably the only place where cats have been domesticated by men. Whenever there are a decent group of tourists, the monks there make fat cats jump through rings. At some workshops, Padaung women with their famous ringed long necks are kept as zoo species, their sad boring eyes seeming to have already said farewell to life. At the week market, what caught my eye were the lady who was selling just a small bag full of salt and another young girl selling a small collection of western medicines, all splayed on the grass. The Myanmar vendors have an interesting way of bargaining with the tourists as they smilingly say “Me no lucky” meaning the price the tourist is suggesting is too low and “Me only lucky” when the deal is sealed meaning she has barely made a profit but it’s OK.
As I took the boat ride, I felt like a king contemplating his kingdom because of the large chair with cushions on which I had to sit that was placed at the very centre of a long boat. Whenever the boat approached any of the stilted houses, kids left everything else they were doing to give me a wave. I suppose foreigners are like pampered toys for Myanmar children who they feel obliged to take note of.
I spend a few days cycling and hiking around the lake. The roads are the bumpies I have encountered and whenever I hit a relatively flat stretch, I understand what paradise means. The guides for hiking take me to PaO villages along the hills surrounding the lake and as we cook a meal in one of the local houses, the awkward silence tells how hard breaking human barriers can be. All the same, my guide was the only person I could have an intelligent conversation with during my stay in Myanmar and he was as much interested in learning about other places and cultures I had visited.
Back in the main town of Nyaungshwe, the restaurants treat their solitary customers like long lost offspring while the street side stalls bustle with the locals. The delights include spicy vegetarian noodles (Shan style), garlic laden tomato salads, spicy deep fried beancurd, omelet curry, minced chicken stuffed pancakes, and sweet milk tea. People at Myanmar love giving receipts, and I received the most intriguing receipt as I paid for my shared taxi booking to the airport. The lady at the shop, who was earlier an English teacher, gave me a receipt saying, “I already paid this much for this, I am from Singapore, and I am staying at this hotel, and I will be waiting at this time tomorrow”, signed by me and her and then stamped. The numerous tea-shops are buzzing with happiness during the day as locals spend hours there talking, watching TV, sipping milk tea and eating deepest fried snacks. The owner lady at one such shop was keeping high everyone’s spirits by screaming the “Yo”s in Burmese rap videos she was playing on TV. The only barber shop is always empty and he spends time listening to loud Buddhist chants on the radio, waiting for those few customers who are yet to fall for the trendy North Asian hairstyles so popular among the locales here.
A few words must be said about the riotous dogs of this friendly and humble place. These shameless horny animals care for no authority. One day I saw a couple of them loudly making love right next to a police station with their customary “May I Help You” signages as another five dogs surrounded them and started barking as if to cheer the male. And one day as I got down from my cycle to explore a pricey lakeside resort, the house dog came up silently and bit my shoe. Marx was right about the evils of private property, and much of its evil character originates from these house dogs.
The town sleeps early and by eight at night, the lights have turned off, while the earth sleeps beneath a bowl full of stars, a lonely crooner playing his guitar by one of the canals, the soft splashing of waters providing the beat.
P.S. Pictures of Myanmar at this link
Posted by Shivaji at 4:07 PM