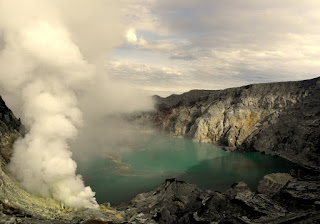 It was supposed to be an arduous trip with the promise of daily wake-ups at 3AM to catch the sunrise. For we tourists love sunrise. But I coped well by turning my clocks forward, by a few hours and a good number of years. Every night, I would sleep by 8PM and wake up the next morning by 3; just like any man would do in his 80s. And early next day, I was scaling mountains in the dark, a stupid looking light fitted to my head, and my mind still groggy at the pointlessness of it all.
But once at the viewing point, it seemed worth a L’Oreal wash later. And since the essence of any writing is to explain things in analogies instead of saying it directly, let me tell you that the erupting volcano looked as if the sky was developing cancerous cells by the minute, as if the earth was sputtering out its pus from its giant boil, as if Mount Bromo had a bad stomach after many years of healthy lifestyle. And a few lovestruck tourists took this dust filled opportunity to kiss and renew their vows. A trek around the villages surrounding Bromo promised world’s most amazing views, as the owner at my guesthouse explained in his broken English. But on my way back, I hit the path of the rain of dust. Sand was falling from the sky in thick drops and the entire surrounding was an eerie grey from the ash and sand. It seemed like Independence Day and I was desperately in need for an American President. My Arabic veil-like dress was so covered in sand that CNN would have easily mistaken me for a rescued Chinese miner. “Oh, another mine accident in China, darn the Chinese, the West is the Best.” None the less, the farmers I met on the way, were delighted to see me in my funny suit, and asked me all the details that mattered to them: where I come from and if I was liking it here. Later I came to know that they were having a miserable time, replanting saplings every day, only to see them destroyed by the ash when they woke up next morning.
I left them with their misfortune and headed to Kalau Ijen, another volcano that promised the most spectacular and apocalyptic blue lake in the world (source: tour pamphlets). The long car ride was rather refreshing along the coastal road of North Java, wit lush green rice fields by the side. And my driver made a point to get me photographed along with any idle looking person on the way. His excitement kept the spirits high as he asked me whether anything on sight could be found in India as well and at what price: from bananas, to gasoline, to drivers on hire. At our resting place at the village near Ijen, I spent a few hours in silence stuck with another lovestruck couple in the smallest and cheapest hot spring pool. After dinner, I was attracted to the booming disco beats coming from the market and there I was in front of the village cinema, a small shack where a couple was playing music videos on request and for a small fee. The volume was over the top and a few bearded men at the nearby mosque were struggling to remain somber in response to this all-out assault. The shack was the centre of all attention and happiness in the village that night and after exchanging a few high fives with the local children and sharing all important details about me, I collapsed, old man, style, waiting for the next insane wake-up.
Ijen is indeed a beautiful place, a lovely trek through lush green hills, eventually exposing a devastated landscape with a sulfur mines, geothermal smoke vents and a turquoise lake in between it all. But Ijen is above all, a very poignant pace, where poor miners, young and old, dig through chucks of sulfur, standing right in front of the smoke, and then carry upto 80kgs of the load up the craters rim and then down for a distance of 3km. Some of them moan on the way up, some plead for a cigarette and some just take a break and ask with a smile for their photographs to be taken. Their backs have deep black marks from the load and they seek to keep their spirits high cracking jokes among themselves.
The way back to Surabaya is again entertaining, courtesy my driver who was treating every moment like a rollercoaster ride. I was mostly talking to him in Bahasa Indonesia, but sometimes I was asking the wrong questions. Once I kept on asking him “Why” I should go to Surabaya airport, instead of “When”. But my driver responded in kind, practicing his broken English with me, and when I went to his home to take a short break, he introduced his wife to me as “Your wife”. Equally charming were the names of Indonesian towns like Probollingo, Sitobondo, and Bondowoso that passed by.

P.S. Pictures of East Java can be found in this link
Posted by Shivaji at 9:50 PM

Quite the traveler you are :-) Very nice blog. I wish I could travel as much :(

btw, Would you like to try out my novel blogging platform?

zeole.com is a unified blog for people for a single place. In zeole.com you target your viewers directly based on location.

In zeole.com, since you chose the location before you write, it is lot easier for readers to find your writings, and so you get lots of comments too!

It would be great to have you there in zeole.com :)