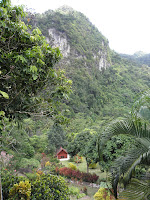 This is low season in Krabi, with unpredictable rains, choppy seas, and cheaper hotels. None the less, there is enough bargain hunters in this world of 6 billion people, and at monkey bay, the resident monkeys are outnumbered by a huge margin by non-resident hairless Asian and Caucasian tourists. On water, there are more snorkelers floating around in colorful life jackets, with their baby elephant nostrils held high in happiness, than the fish underneath. So we try to bribe the fish with someone’s leftover bread and they oblige in hundreds with their gentle bites.

In order to truly experience low season, we spend a day at the Phanom Bencha Mountain resort, with pictures at the reception of cobras and pythons that had been seen within the resort, a sure shot way of not scaring away any tourists from staying there. If you don’t get fussy about this lack of formal management training of the owner of this resort, this is a lovely and tranquil place with its few bright colored bungalows aesthetically placed along the hill covered with beautiful fruit-laden trees. As we walked along the layered stream, bamboo trees put up an orchestra as they lazily bent to the gutsy wind. Here, the geckos haven’t learnt to keep down their stupid sounding calls. Rows of rubber trees surround the place, one bucket fixed to each to collect their milky pee. A white puppy with baby doll hair can’t contain his happiness at seeing us strangers and lick us extensively like a gourmet ice cream. The lovely lady at the restaurant giggles whenever we order something and we wonder whether we made the best or the worst choice. At night, the Milky Way makes us wonder why the sky was so stingy to shine only a few hundred billion stars. We spend the night playing chess, the white pieces carved in imitation of Caucasian invaders with white old beards and the black ones resembling young American Indians.

Back at town, we resist the temptation to take the bus to some bus stop named Ao Nang Gastropod. At Bamboo Island, it seems like the earth is returning back raindrops to the sky as thousands of grasshoppers jump from their homely grass heads when we tresspass their private property. At Railay Beach, upscale resorts share space with a big cave housing ashrine for many wooden penises, some human like, some that could put a Right Whale to shame. The femaletourists gather around it, praying silently for world peace. Nearby, the trip to a hidden lagoon squeezes out all the adrenalin with its steep rock climbing, offering a beautiful lagoon surrounded by limestone karsts as the reward of persistence. And a few words must be mentioned for these limestone karsts, the main reason why people come to Krabi. Since they can’t match the glory of Everest or Kilimanjaro, these proud karsts avoid the irrelevance of simple hills by coming in coming shapes, some like a chicken’s head, some resembling a melting ice cream cone. While some needlessly jut out from the sea, others form glorious stalactites and stalagmites to get some personality of their own.

At the rather small night food market in Krabi town, a long-haired uncle explains the items on the menu by indicating his own body parts. The oxtail soup is well under understood as he pats his own ass. The ox penises with their scrotums cut into half obviously need no such explanation. At the next stall, the old couple running the show has specialized in different skills after a great battle of ideas. So the uncle makes small rolls filled with yam or coconut jam while the aunty makes small pancakes filled with the same stuffing. They work in delicate movements and probably have a daily contest between themselves about who is more popular. In this war of Pancakes vs Rolls, rolls were winning that day, as far as we know.
Posted by Shivaji at 8:16 PM