Once upon a beach: Trikora, Indonesia 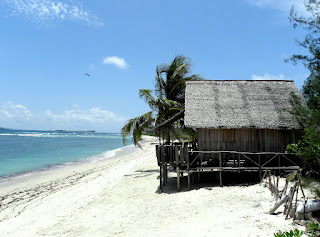 A hut stands in front of the sea, perched rather tensely on top of a few stilts that were once branches. It appears as if it could at any moment decide to head down for a swim. The waves, rather impatient and angry, keep calling at it on behalf of the sea. Their impatience seems rather foolish given that they have been waiting for years. A fallen coconut and an empty glass bottle listens to the call and head down rolling to an unknown bottom. A bleached fallen tree trunk gets drenched every few seconds during the high tide. Does it know that it will never get back its leaves and roots? For now, it has been colonized by a few sympathetic almond shaped snails. The mother breeze that came from the horizon, the point where the sea drew a faint blue line below the sky, lets its offspring keep chasing each other playfully like a bunch of naughty siblings. The colors everywhere are in strong hues, but seen together, is magic. The striking blue of the sky, the patches of blue of the ocean in different shades, the white glaring sand, the bleached hut, the golden tipped grassland by the shore and a few plants with pink and white flowers; together they create a whimsical window to the universe. This is Trikora, 41 km from the port of Tanjung Pinang, in the island of Bintan, Indonesia.
There’s not much meaningful to do but to keep looking at the mosquito net, counting the number of places from which sunlight is pouring in to the hut. Will it rain later? The sound of the waves distracts us and all important considerations dissolve into a state of numbness. A swallow keeps flying low; several small purple snails have been washed ashore. A bunch of local children arrive and gang up on the sea. They throw stones on the water and run back every time the sea gives them a chase. Lobo, the person managing this place, is laughing every time we speak, a few laughs before we finish our sentences and few laughs after. I have a feeling that he knows the meaning of life. One of the two dogs gets friendly with us; his tail moving like a car wiper. He looks at us with kind eyes, wondering if we would consider giving him some leftovers. He knows the meaning of life too. His mother is too bored to be involved in all this and keeps enjoying her rest by the shade. Two white butterflies are scanning this patch of land for some sweetness. A lizard dashes by, with all seriousness as if it was crossing a minefield. Its tail is still visible from the bush where it is hiding now. Across the road, a wedding is taking place. Some amateur singer is unleashing her voice over a 1960’s megaphone on the guests who have occupied a few plastic chairs. The children there are having the most fun as they climb a coconut tree only to be pulled down soon by others and this circle of life continues all day.
As night falls, the stars appear one by one begging us to trust them instead of others for directions. Their glory is soon over as a big fat moon lumbers up from the sea. The breeze is getting cold and a group of people have set up a bonfire. The sounds of the waves sing us to sleep. As the day breaks, it’s time to go back. The dogs keep looking at our van. They will stay back at this place stuck in amber.

P.S. More pictures of Trikora here
Posted by Shivaji at 8:02 AM