Hot fumes rammed in through my lungs. My cheeks burned. Have I caught fire? The wind had suddenly changed its course bringing along earth’s fiery belches. We should have heeded the banner at the entrance, “Temporary Closure.” We were being swallowed; choking inside a dragon’s entrails. My eyes couldn’t open. Could we run away? But any mistake meant death; an extremely acidic lake waited below. I crouched, and feeling the rocks, crawled away from this onslaught. Finally, breath! Eyes opened; we had reached the crater of Kawah Ijen.

“Hello!” it was Yama, the god of death, sitting on a rock, holding a scepter. But close up, Yama was a small old man, with thin moustache and broken teeth, wearing oversized rubber boots. His crown was his headlight pointing skyward. Was he really Yama? “I am Papa Agus,” he clarified, “I work in the sulfur mines here. Don’t worry. This smoke is like free cigarette.” We were still alive.
Located in East Java, Indonesia, Kawah Ijen is an active volcano that last erupted a decade ago. The volcano is 2,799 metres high and has a crater lake that is a kilometer wide. The nearest towns are Bondowoso and Banyuwangi, 50 kms on either side of Ijen. The nearest settlements were about 10km away.
We had arrived at the Paltuding Base camp, the starting point for the trek to Ijen, after a back-breaking ten hour drive from Surabaya. The journey was only made bearable because of the several durian stops we made along the way. The lodge at the base camp was a tiny enclosure with a questionably stained bed, a phalanx of numb mosquitoes, and heavily cracked floor. When we asked about the toilets, the lodge boy smiled, “Very sorry, here only ‘natural’.” So it was, in freezing temperature, we would walk inside the dark forest to find a place worthy of ‘natural’. 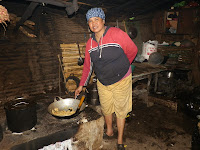 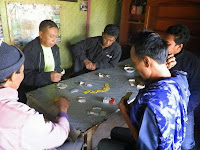 To kill time, we spent hours at the only warung (small shop) open for business, run by a loud, boisterous, hyper-happy mama with a rather small and timid husband We played a simple game of cards, disturbed a cat named Timur (East) every now and then, and counted the stars. We made friends with two students from Yogyakarta who were helping to rehabilitate hawk-eagles captured from poachers. They promised to take us for bird feeding the next day. They put live pigeons inside its enclosure to help the bird learn hunting again.


That night, around 2 AM, we had begun our trek to the crater. We climbed slowly with the aid of a tiny torchlight; stopping every few minutes to unleash a volley of coughs whenever the sulfurous wind came by to warn us.  Once at the peak, we came down to the crater along the steep and narrow half-trail. “Ahhhh….. humppphh….cough, cough…spit…ahhhhh…” The whole mountain had become a chain of moans, coughs and spits. These were coming from the sulfur miners, climbing up from the crater. Each was carrying a heavy load of sulfur, put in two baskets hanging from a beam that they balanced over their shoulders. They too had ignored the closure warning.
Over 350 people work as miners at Ijen, though at any given day, there are only about a 100. Most of these miners are from Rotorua, some come from Banyuangi. They come after midnight, go up the 3km trail to the top of Ijen and then go down another 800 metres to the mines. A strong miner could do at most two trips in a day.
At the crater, the earth was burning in three giant blue ovens; shifting shapes, imitating supernova; evil fairies that danced only at night; every night. The smoke hurled out of these arched over us into a buzzing tsunami. We were peeking into hell’s guts. Miners worked at the flames’ edges, breaking the cooled yellow newborn with rods.


﻿ At sunrise, the blue fire disappeared. The lake shed its grey blanket; a turquoise soup in a wrinkled bowl. The lake is known to burp out fatal gases. Its calmness was eerie. Only yearning dead spirits could survive underneath.
﻿﻿We went closer to the vents which were now hurling out giant white clouds. Ceramic pipes dug into these were drooling molten sulfur. It came out of the womb in bright orange, turning yellow soon as it spilled out and cooled. The flat sulfur chunks were cut and placed like long rabbit ears in the basket. Inside the basket, it cooled, sending out faint crackling sounds in the air, almost melodious.

As we were climbing up to the crater rim again, we kept looking back at the destructive beauty of the landscape. Scraggy cliffs with tortured skin encircled the lake from one corner of which came out the smoke that was losing itself in the clouds. The low sun was still throwing out red and gold onto the clouds. Papa Agus joined us on, carrying the sulfur cakes.
The volcano’s angry belches came again and again. Each time, we crawled away, blinded. My insides burned. My mouth frothed. But with his load, Papa Agus had nowhere to hide. He just kept his head down like a withering tree. He was moaning in exhaustion, “Ahhhh…. cough…spit..” The climb up to the peak was squeezing out every drop of his strength. He rested every two minutes. I tried to help him. But I couldn’t lift the baskets even one inch. He grinned, “Its ninety kg. I have been doing this for the last forty years.”
Further up, we overtook a young miner, “Photo, photo,” he called us back with a smile.

On the way down, Papa Agus became a whistling gazelle, moving in springy steps, almost dancing. We struggled to keep pace. “Faster,” he laughed, “You’re not seventy-two like me.” Dead tree stumps were scattered everywhere; bent, seemingly too late while running away from a catastrophe.
Halfway down the slope, there is a small tea stall where miners took a break. We met Adi there. “See how my skin feels like,” he pulled down his shirt to expose his shoulders. There were two dark patches, where the beam for the load rested on his shoulders. “Touch it, touch it.” The patches were rough and flaky, like a snake’s shed skin. We saw some filled-up baskets left idle. “No one steals anyone else’s load. We all know each other.” Some do write their names on the beams. “That’s to recognize your load in case many of them are kept together.” One miner approached us with small carvings he had made with the sulfur: rabbit, panda, turtle, and hello kitty.

Back at the Paltuding base camp, the miners had placed their loads in a queue next to the weighing station. They got seven hundred and fifty Rupiah for one kilo. A typical miner could make ten to fifteen dollars a day. They all greet us. Saleh Hidayat, a miner, and Pak Sukhandi, the truck driver stay back for a chat. With his glasses and hat, Sukhandi almost passes for a shy intellectual.
Saleh has been mining here for 13 years. He has a son and a daughter, both going to school. “Life is not too bad,” he says, “Schooling is cheap, and the government hospital is free. My wife cooks a little everyday but it tastes good.” “No one has died here,” says Sukhandi, “It look’s dangerous. And it feels very bad when the smoke comes at you. But so far, no one has died.” Papa Agus interjects, “But it can be very dangerous when it’s raining.”
The miners who had already got paid were unloading the sulfur onto Sukhandi’s truck. Sukhandi explained that the sulfur is molten into blocks at Banyuangi and then to Surabaya for use in cosmetics, explosives and tires. Every day Sukhandi also collected the miners to bring them to their beautiful deadly workplace.
Zul, one of the students we had befriended at the night before came running, “The food has died. We can’t see feeding today.” We went anyway to see the hawk-eagle. It was kept in a huge netted enclosure to create some sense of the wild. Zul whispered, “Hide behind the bush. Don’t let the bird see you. Otherwise it will lose fear of humans.” On our way back we saw many tracks and smell; clear evidence that this place happened to be a favorite area for ‘natural’. Poor bird, by now it must have not only lost all fear of humans; it must have lost all respect for this species preoccupied with ‘natural’.
We went back to the base camp where we met Papa Agus again. “When will you retire, Papa?” we ask as we say goodbye. He laughs, “Till I die, I will have to dig fire.” 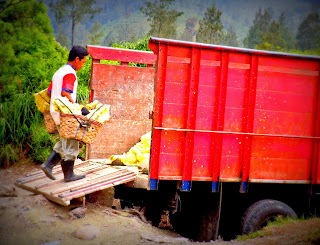 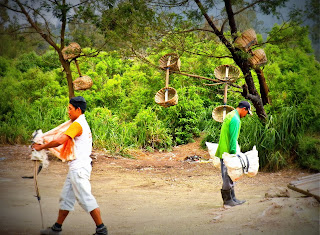 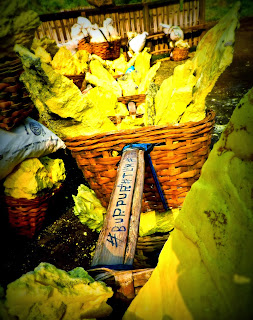 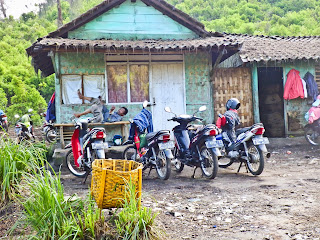