Fishing the Bowels of the Earth – Artisanal Diamond Mining in South Kalimantan, Indonesia 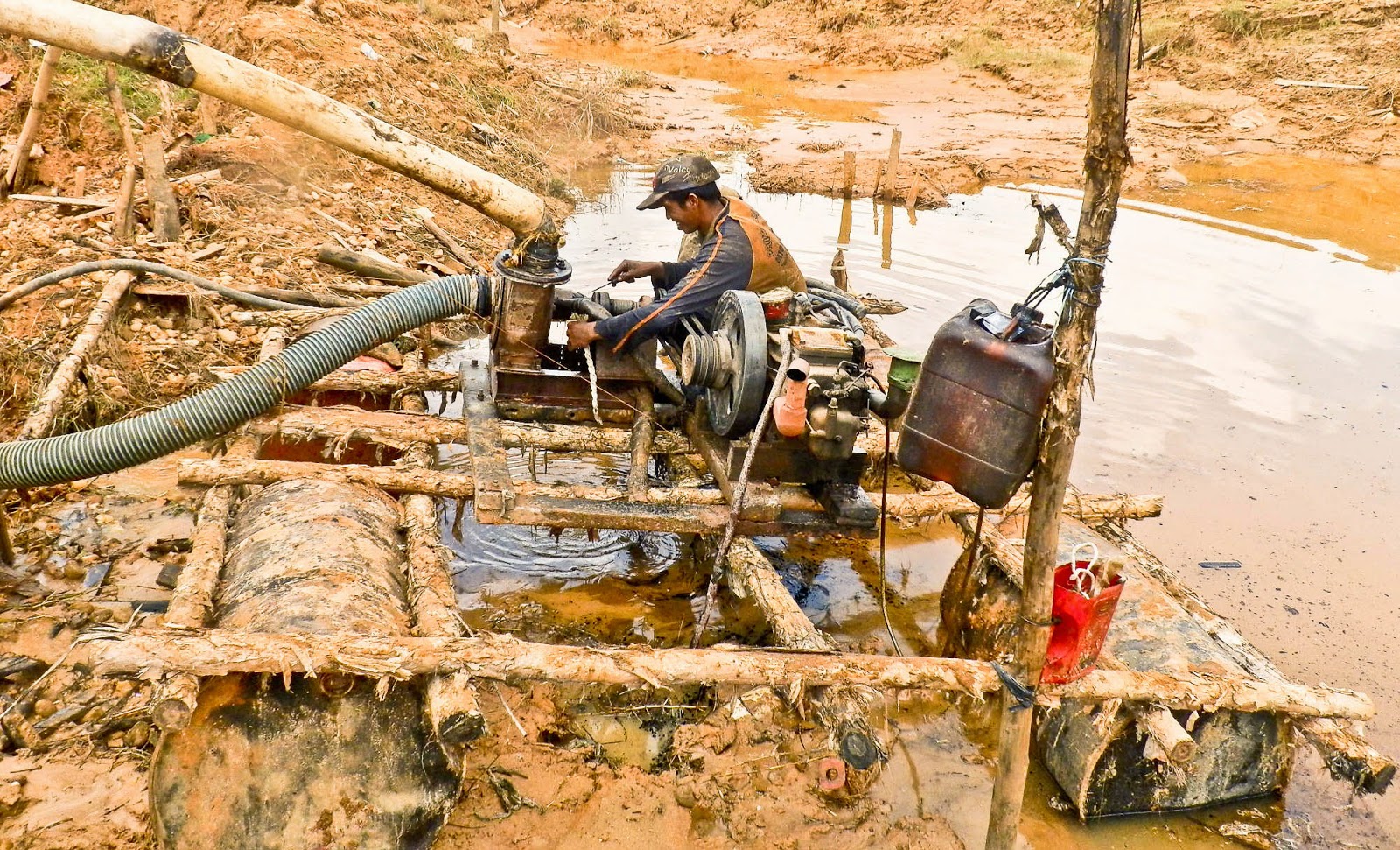 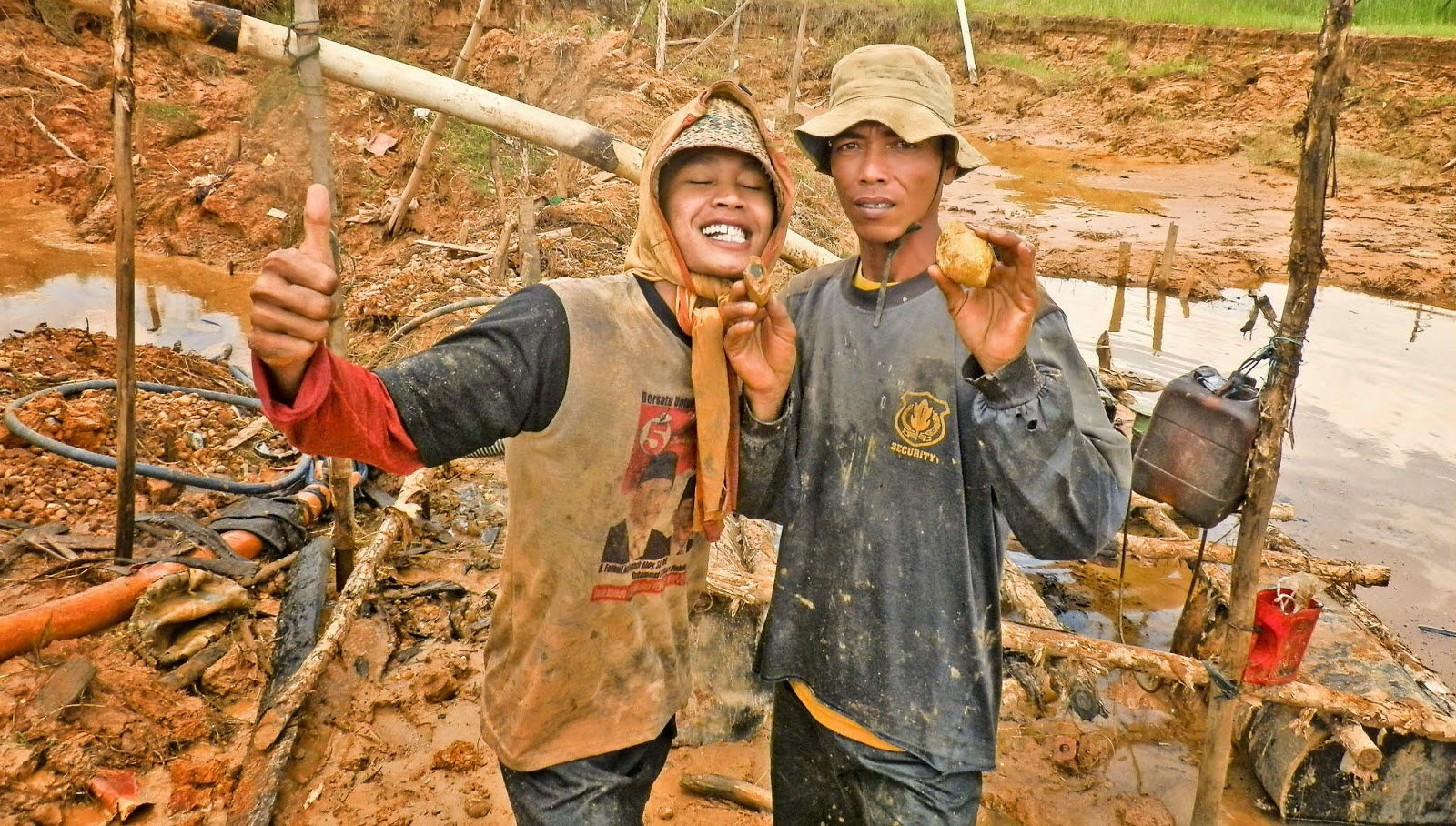 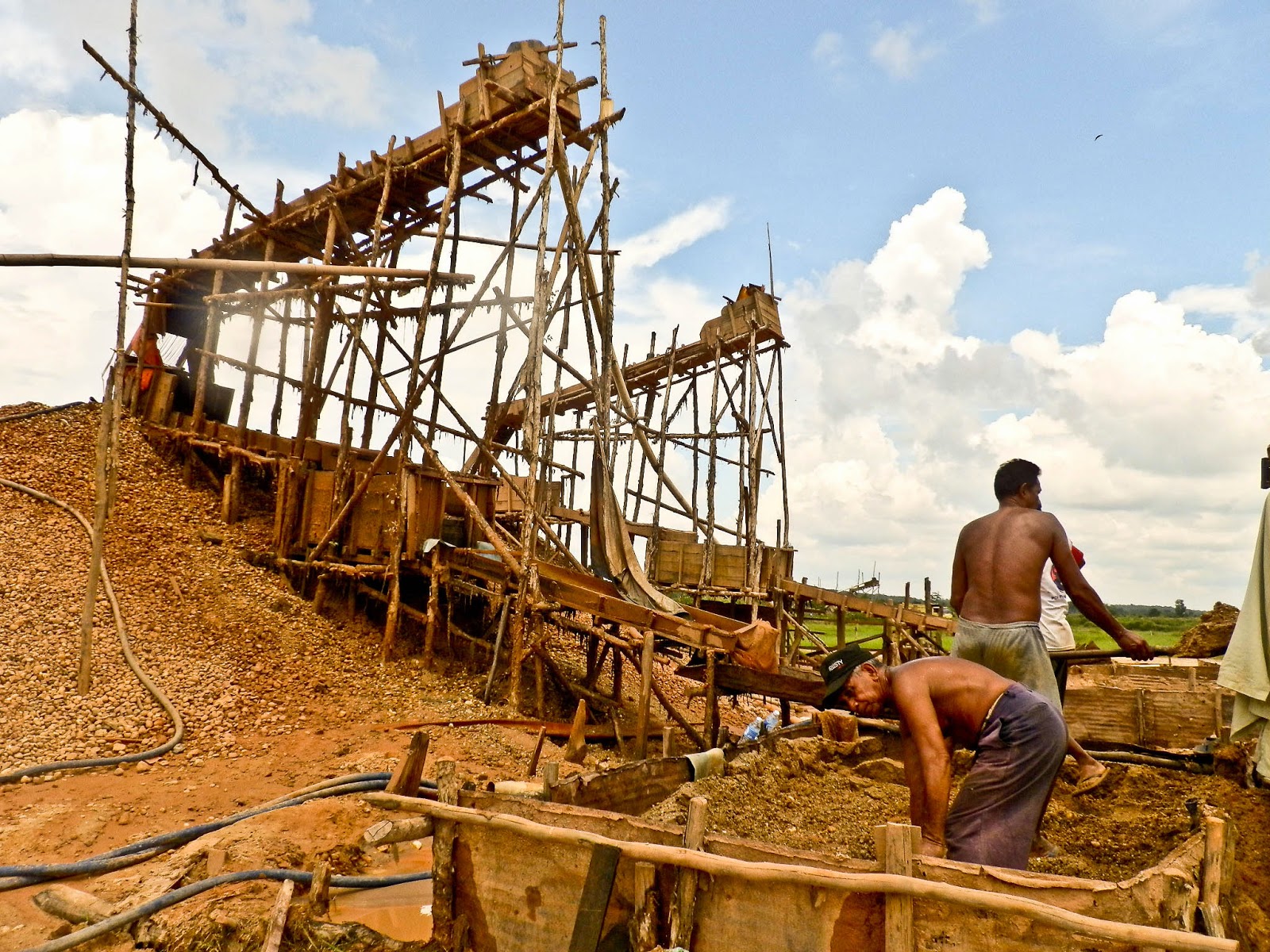 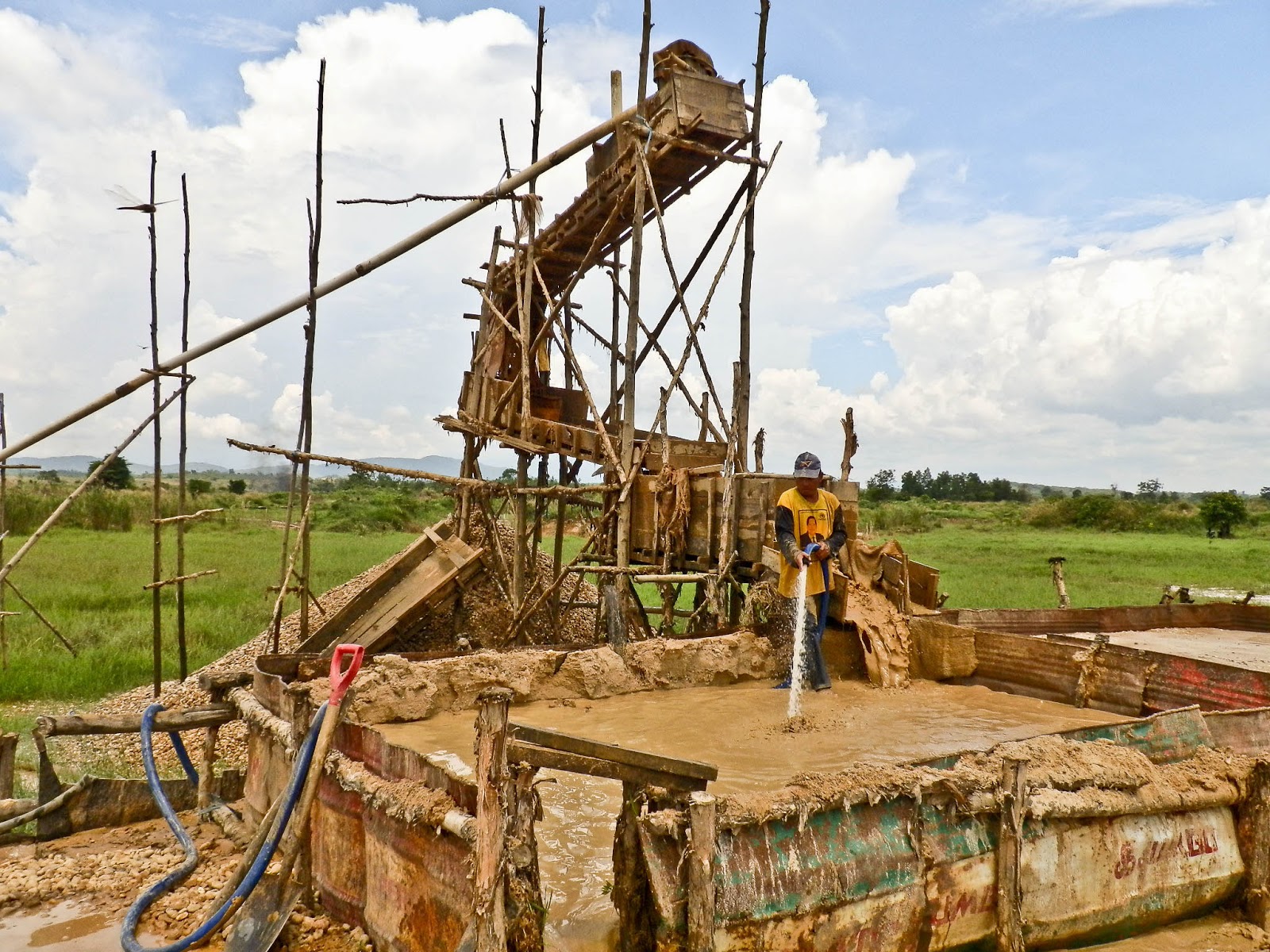 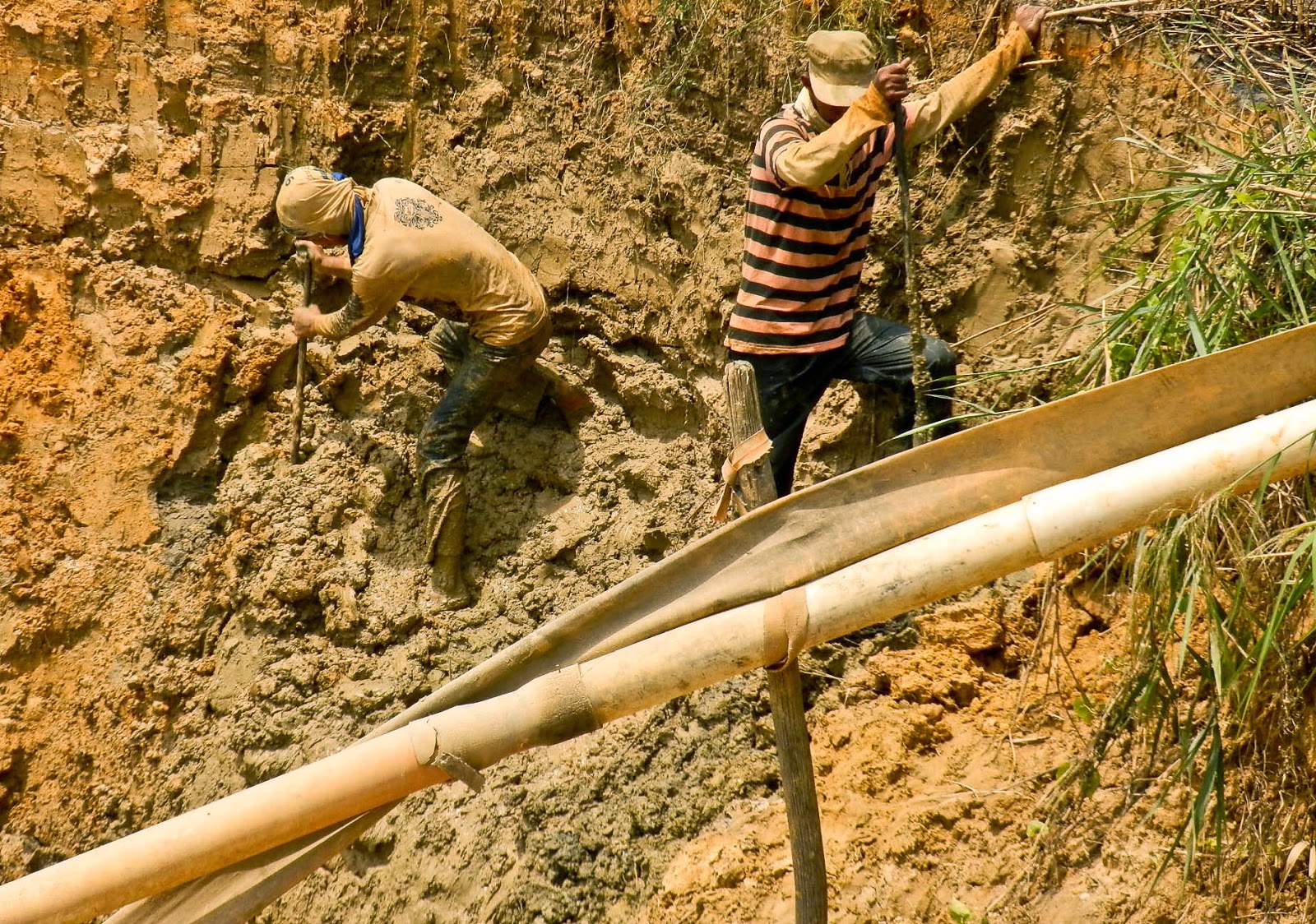 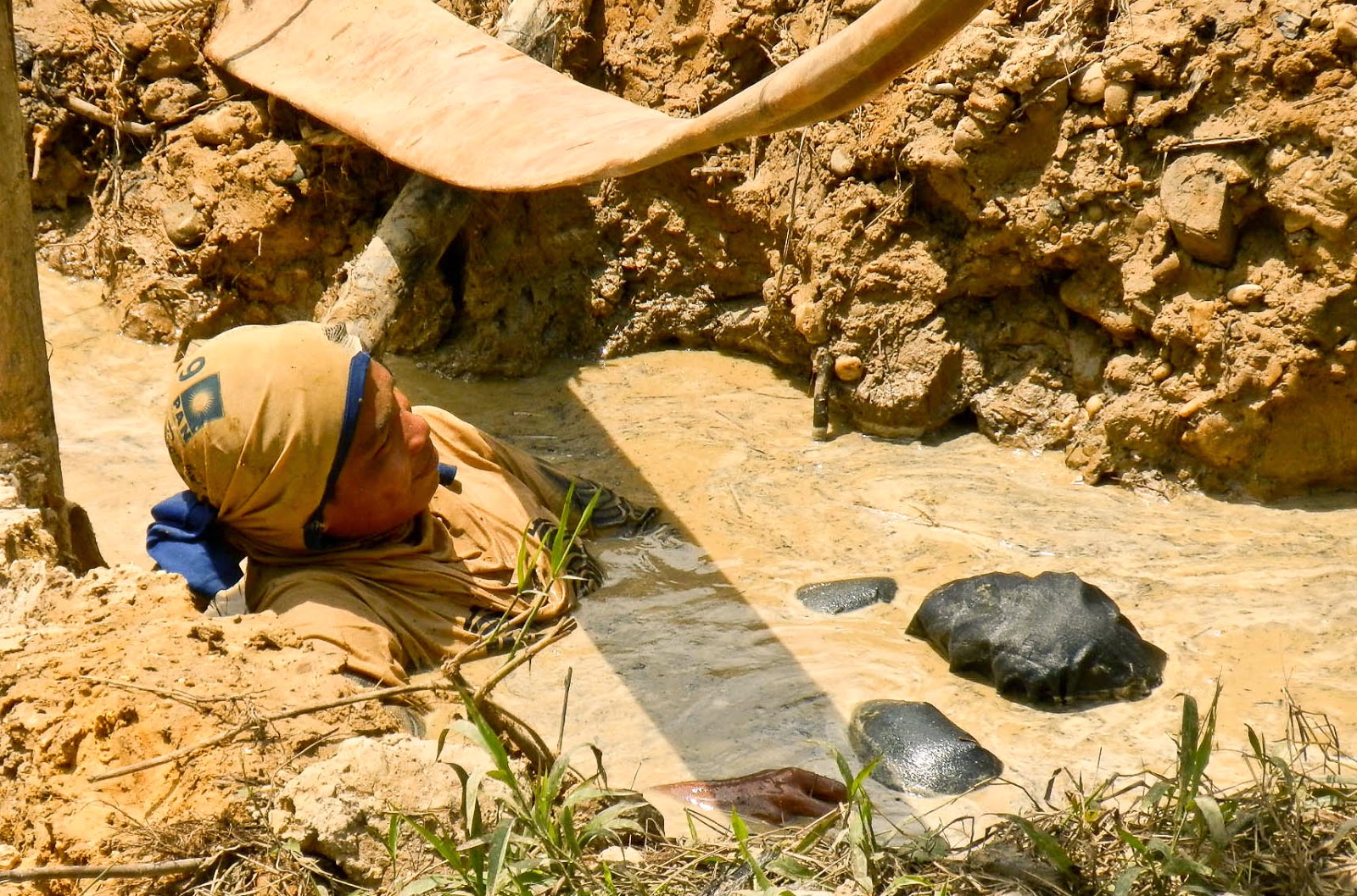 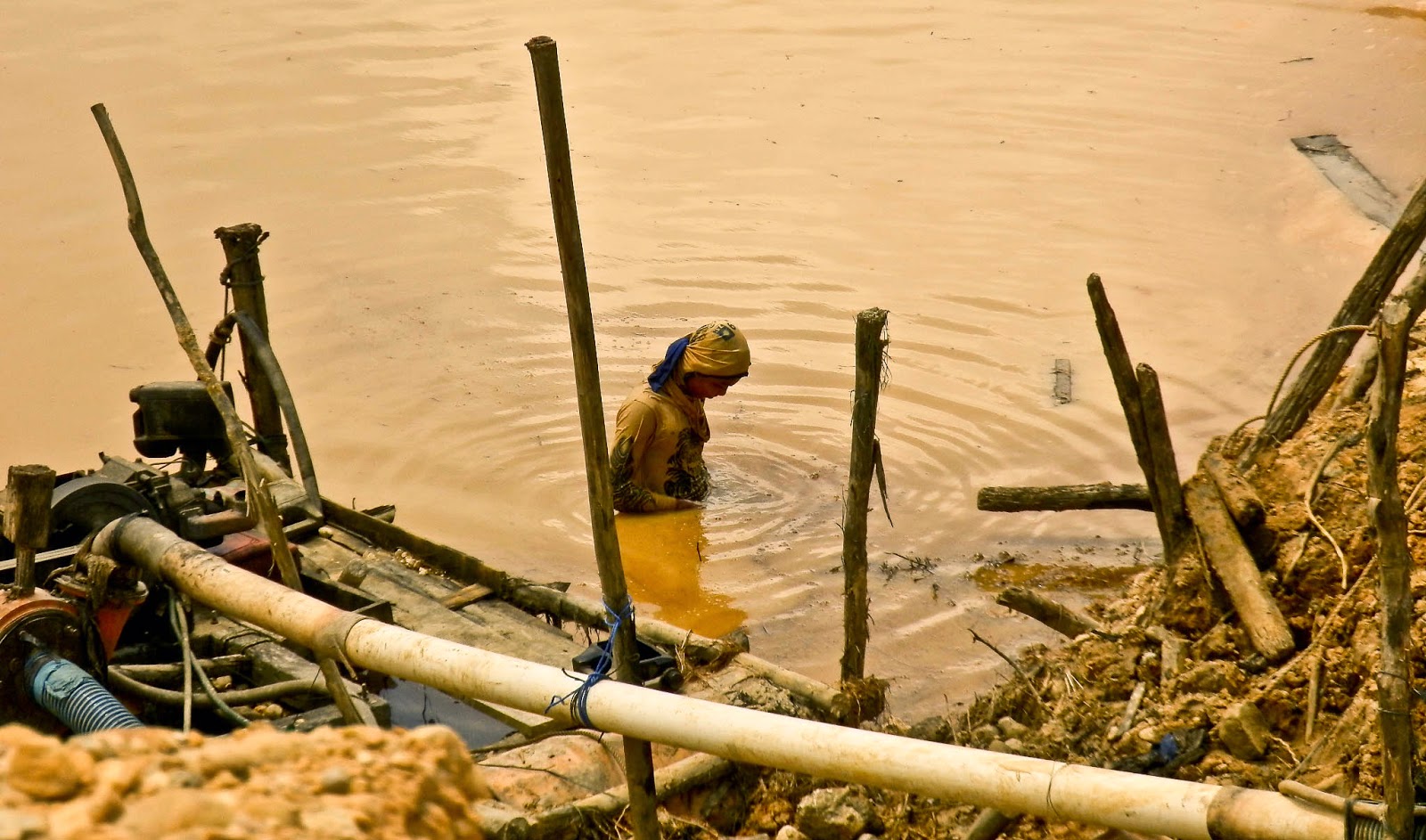 As my motorcycle entered the diamond mines at Pumpung, a village near Cempaka in South Kalimantan, I was greeted by the buzz of several throbbing hurts, makeshift water pumps scattered around a vast green flatland interspersed with tiny brown hillocks. Each hillock had a bamboo stairway to heaven placed in front of them.  The trail to these was flooded, and I walked like a drunkard along the edges, trying to keep my feet dry and clean. Soon I spotted the first pit, where the earth had hidden its treasures but failed to keep the secret.

Four men stood along the slopes of the pit, digging for fortune. The earth, a swampland, constantly oozed water into these pits to annoy these men, like a child not wanting to share her toys. The pumps worked for the men to suck out this water while the sun worked for the earth to scorch the men. Again and again, the men would slip and slide down the mud. But they climbed back, fully layered in mud, almost unrecognizable from the pit, and then again gave the pit a few blows with their shovel before sliding down. I imagined the fancy jewellery stores with perfect air-conditioning in Singapore and Jakarta, with sharp-suited sales girls guiding our vision with warm spotlights on dark velvet. This world couldn’t have been further from that.

As soon as the miners saw me, they found an excuse to take a break from this contest and struggled up the pit to give me high-fives. Then immediately, they apologized realizing that their hands were full of mud. “Look what we found today!” Anang, a man in his thirties with a chiselled face and weather-beaten skin, showed me two rocks with black innards, “It’s not that most precious stone, but these will get us ten thousand rupiah.” That’s a little less than a dollar. Mostafa, a miner in his early twenties with baby cheeks, was the most excited, “Come take my picture with these rocks!” he poses, “Hey, you!” He shouts to the two men working the pump, “Pose for him.”

Anang and Mostafa showed me around, “We dig out the mud and then mix it with more water and then put it in these machines,” The machines, which I had taken to be the stairway to heaven, were for sluicing. “Then the mineral bearing rocks separate out from the mud after which we have to inspect these rocks manually.” Three old men were shovelling up the mud to the mouth of the sluicing machines. They were panting in the heat, resting after every four or five attempts. “We take turns to do this,” said Anang, “All of us are from the same village. I have been doing this for twelve years. My father has been at it for thirty years.”

Many such mines are scattered around south Kalimantan. The miners exhaust one pit and then move further to dig a new one. Diamond mining here is over a hundred and fifty years old practice though some date this to over four hundred years. Apart from Diamond, the pits give out other minerals such as topaz, emerald, amethyst and gold. In 1965, a 166.85 carat diamond named Trisakti was found in Pumpung. And in 2008, a 200 carat diamond named Puteri Malu was found nearby. However, it is unusual to find anything over 5 carats from these mines. Anang says, “It’s not just the size. Most of the diamonds have defects and sell for much less. But we just need one big one,” he makes a round hole with his fingers, “Just once, this big!”
Anywhere in the world, artisanal mining is as much about hard work as it is about superstitions. At Pumpung, one shouldn't ever say the word intan (diamond) in the vicinity of the pits; else he will not hit diamond for years; just like Garimpos in Mato Grasso in Brazil believe that one is doomed if one finds gold instead of diamonds. Mostafa whispers as he giggles, “That man with the hat working at the machine; he doesn’t talk to anyone. He keeps saying some prayers all the time when at work. But he hasn’t got any big diamond yet.”

The Pumpung miners and the Garimpos also deploy similar business models. The proceeds from the sale is divided between the miners, the owners of the machines and the owner of the land. “Whatever we get, our leader goes and sells at Martapura. We keep fifty percent which we share equally among ourselves, the owner of the machine gets fifteen, and the landowner gets the rest. Some miners don’t use machines and just sort with pans.” Conditioned by my grab-it-all urban conditioning, I have the obvious question; what if you don’t tell the others. “Oh no, that is not possible,” says Anang, “Everyone knows everyone here. You cheat once and you will be outcast for life.”  I recall stories of cheating Garimpos desperately begging anyone to buy all their diamonds in return for a single bowl of Feijoada (bean stew) because not a single buyer would buy from them.

The diamonds and other gems collected from Pumpung are processed in small workshops in the neighbouring town of Martapura. At Martapura, there are many small stores selling the jewels. Visitors come from all over Indonesia to these jewellery stores in Martapura. Again these are not fancy stores; just countless beads hanging from walls and dooframes and the more precious jewels housed inside glasstop wooden cupboards. Some individual sellers just walk around from one prospect to another, taking out his handkerchief to show his collection of gems.

It is time for lunch and the miners gather at a makeshift warung which has been set up by one of the villagers near the pit. “Each pit has its own warung, if she sees us walk over to the next warung, she will scream louder than these pumps” the man who says prayers takes a break to crack this joke at the warung’s owner and the entire group breaks into laughter. Mostafa says, “Yes, that’s another rule for the miners. Even though our house is just a five-minute walk, we have to have lunch at our respective warungs.” Lunch is instant noodles with a glass of tea and afterwards, as the miners relax over a smoke, I head on to the neighbouring pits.

Again, the young men digging the sides are overjoyed and pose for me, asking for photographs, some raising Ronnie James Dio’s famous sign of the horns. The youngest of the lot slides in the walls of the pit and lands on the water below. He then goes completely under the muddy water. His elder brother, Ahmed, walks up to talk to me, “My brother is a water buffalo. He can’t take the heat for long and goes in the water every now and then.” Ahmed is twenty five and has been working at the mine for five years, “I have two daughters already. Both go to school. We get married by the time we are twenty.” Ahmed says that working in the mines is safe but it is tough initially, “When I started here, I used to get fever every few days. The sun was unbearable. But you get used to it.” The miners work from sunrise to sunset and take a day off on Friday.

Diamond mining in South Kalimantan has been through ups and downs; a contest between greater mechanization and the consequent depletion followed by even greater mechanization. And despite so much depending on the hope of that one big find, the miners remain equanimous about their lives. They are driven by natural human spirits; to take risks but also to share risks. They are curious to know about the outside world and relish interacting with outsiders. Pumpung, the home they have built for themselves, is a charming idyll of colourful clothes on washing lines with only the occasional scampering chickens disturbing the peace. And on Fridays, they don their best clothes to go to Martapura to pray at its Grand Mosque and shop and eat with their family at the market.

As I rode back, the women and children shouted goodbyes and I was left with a warm feeling. My hands, muddy from the high-fives, had dried-up. And I had this sudden whim to never wash my hands again.
Posted by Shivaji at 6:42 PM