The highs and lows of Banjarmasin


Perhaps Banjarmasin is an amphibian. On land, I found this South Kalimantan town like any other Indonesian town, with streaming motorcycles, markets overflowing with stuffed toys, and thousands of Aneka Gorengan (Deep fried snacks) carts continuing their millennial race. But once I ventured into one of the town’s hundreds of canals, Banjarmasin revealed its true character.
When the engines of my small boat began humming, it was like Basho’s ‘frog jumping into an ancient pond’ moment. “Foreigner, foreigner,” a child screamed at the top of her voice. And this message got relayed from one house’s backyard to the next like wildfire. What I had planned to be a one hour for fifty-thousand rupiah contract with my boatman turned into the greatest egotistical trip of my life. For never had I imagined I had such great capacity to bring happiness to others. The residents of the canal-side houses came out in hordes; bare-naked children, bent-backed grannies, cool-vibe oozing soccer teens, toned young males made of copper and beaming pregnant mothers. At my very sight, the children became ecstatic. The boys jumped from their backyards creating waves that folded the otherwise perfect reflection of the houses on the canals. Kids dropped all around me, splashing water that drenched me wet. They swam as fast as they could to my boat, hoping to touch me just once or even better, give a high-five. The stronger boys managed to climb on to my boat and not knowing what to do afterwards, just gave me a smile and fell back into the water. The younger ones screamed out, shaking their head, closing their eyes in utter delight. The girls and the older people folded hands and greeted me with big smiles. There was no doubt! What a wonderful person I am! I didn’t know how to react. It was a sudden attack of innocence on my senses. I wanted to join in the ecstasy, somersault and dive in the murky water, and then scream around with the jovial children. But I had a one hour fifty thousand rupiah contract. So I just waved and waved. “He waved at me, he waved at me!” the neighbourhood was in raptures. I almost felt like I could make the world a better place.

Once things calmed down, I could finally marvel at the endless stream of houses sitting at the banks canals, leisurely hanging their scrawny wooden legs in the water. Houses, mosques, madrasas, grocery shops, furniture stalls, all built with patches of wood, the same colour as the canals, nailed to each other. Some of the houses had lost their footing and were slowly merging with the canals, looking like old men slowly crouching for a hot spring bath. Colourful coffins waited patiently in the coffin workshops along the canal. Canals, canals, more canals; some wide as a soccer field pretending to be a river, some narrow as a log of wood; they connected here and there creating a maze, going about quietly with the business of moving all the muddy water from the washing of the Meratus Mountains; closely watched over by roaming patrols of hyacinths and water lilies.

Here, mornings began with the boatmen and boatwomen waking up the owners of the gasoline stalls by the canals; first by calling their name, then clapping, and then a friendly shove with the oars. Soon, Gauguin’s women came out from the backyards of each house and lather their whole bodies and mouths sitting on the small jetties built from their house, for the women of Banjarmasin love to shower and brush their teeth at the same time. The elderly man came out too, and hundreds of eager fish would splash out begging them for food in the fisheries built on the canals, because it was breakfast time in Banjarmasin.

As the day progressed, the canals became the highways moving people in all direction, tiny heads in white hijab going to school, ducking every time their boat passes under a bridge. An endless flow of motorcycles with their helmets keep running on these bridges; from the boats below, they look like chess pawns on roller blades. The canal fairies of Banjarmasin, the colourful old women selling bananas, guavas, rice and other supplies on canoes, rowed from door to door looking for custom. Throughout the day, elderly women sat facing the canoe holding a fishing rod. And also throughout the day, a thousand and one buckets tied with long strings, built to fetch water from the canals, swung from each backyard like a pendulum, keeping time in the canals of Banjarmasin.

During noon, Banjarmasin is an oppressive piece of earth as the sun turns into a baker. I rushed indoors, inside my small room in the Sariah-compliant hotel, sitting, dozing, moist from the sweat, my arms feeling like enormous concrete blocks. Hour after hour of doing nothing, not a single movement in the dark windowless room, trying to think but soon losing every chain of thought. I was turning into a statue with a drooping head. I was decomposing in Banjarmasin. I was scared. I needed to make a move before the flies moved in from under the doorsil. But I was in a state of trance. My elephant limbs refused to budge. I recalled the high-fives. The children must be waiting for me in the canals, their heads bobbing in and out of the murky water. I had to go. I had to stay alive. I concentrated. My head rose up slowly. The fingers moved. In one huge effort, I left my damp grave and soon I was on a boat in the canals of Banjarmasin.

After another evening of boosting my ego I rushed back to my hotel to retire early for next day, I had an appointment to keep with my boatman at five in the morning. On my way, I realized that Banjarmasin had changed its streets. Jamu, jamu, jamu; traditional male-power drinks; had lined up neatly along an endless chain of small tables that had sprung up from nowhere. Where had all the shops that I had seen during the day eloped? Jamu, jamu, jamu; this was serious business and vendors were indeed looking dead serious. They set up small stools in front of their table-stalls because at nights, Banjarmasin becomes an enormous winding serpent of Jamu bars where patrons swarm in looking grim, focused, not exchanging a single word with anyone around, ordering a Jamu drink with a gesture, then quietly finishing it in small sips, looking down all the time, their mojo building up inside, and then, with burning eyes, hitting the streets of Banjarmasin.
And then I realized, in this archetype conservative town, some windows and doors were lighting up and calling out to these Jamu filled men; one of such love hotels right in front of my Sariah hotel.    That night, I dreamt that I was frolicking about among thousands of half-opened durians, all a bright orange that I had only seen in Banjarmasin.
5 AM, and it was very dark, but the motorcycles were still keeping the streets awake in Banjarmasin. I walked along the banks of one the canals to meet my boatman. There were a few people slumbering about; dark silhouettes, a woman in sleepwear, certainly insane, holding up one arm to heaven; a man walking in helical steps, a stick in his hand; another man wearing a hat, peeing in bits here and there, marking territory. I tried to disappear into the night as well as I could, moving like only a black cat could. And then I came across a young woman who was perhaps wearing a tight jacket and jeans. She had obviously been standing for long as she kept shifting weight from one leg to another. She whistled at me and said, “Come on, young man, let’s play.” I hurried my pace and my heart caught up. What harm could she do to me? But I was petrified. She didn’t walk after me but kept talking, “Come on, darling.” The mosques across the canal began speaking out too and their synchronized muezzin calls were drowning out her voice. I had almost escaped her, when she called out, “It’s cheap!” The muezzin calls wouldn’t stop. “Help me, I am hungry,” she screamed. That moment my hurt sunk and I wept along the canals of Banjarmasin. 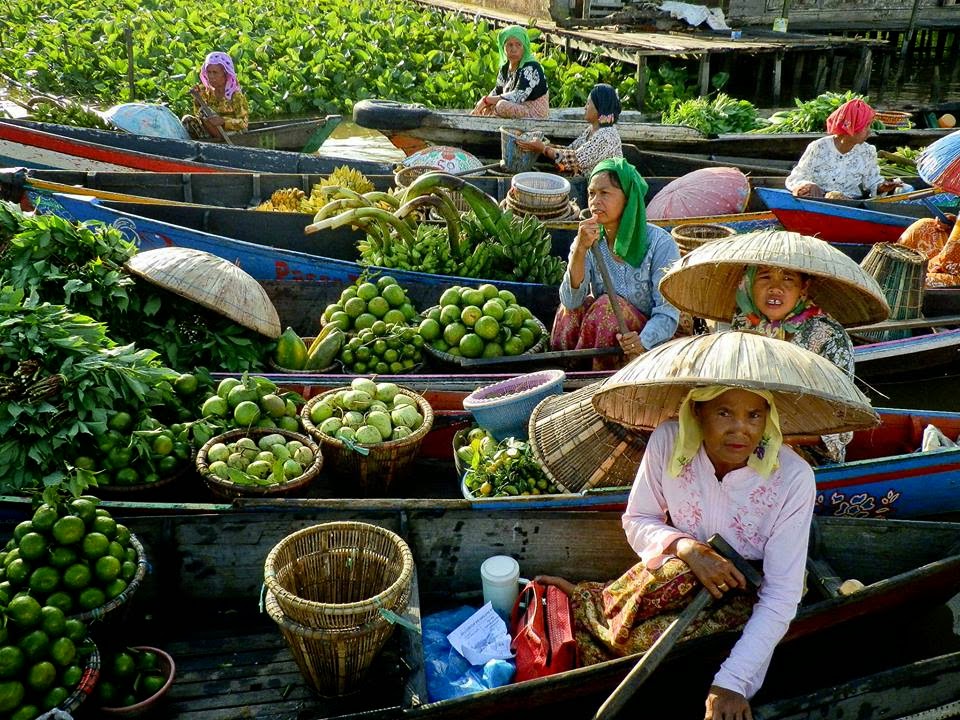 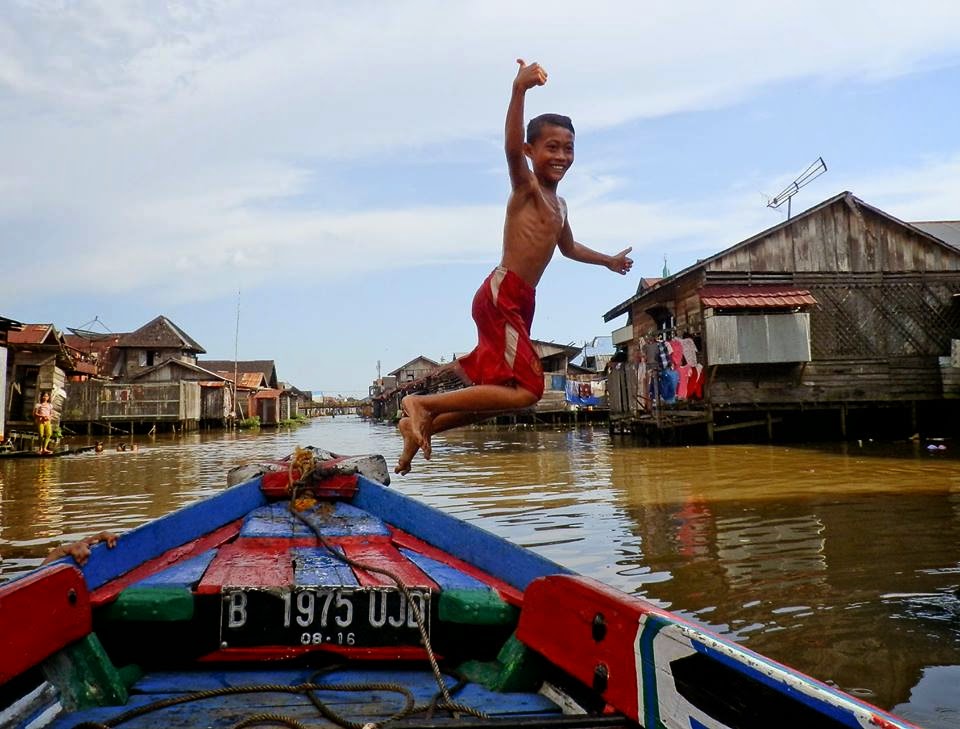 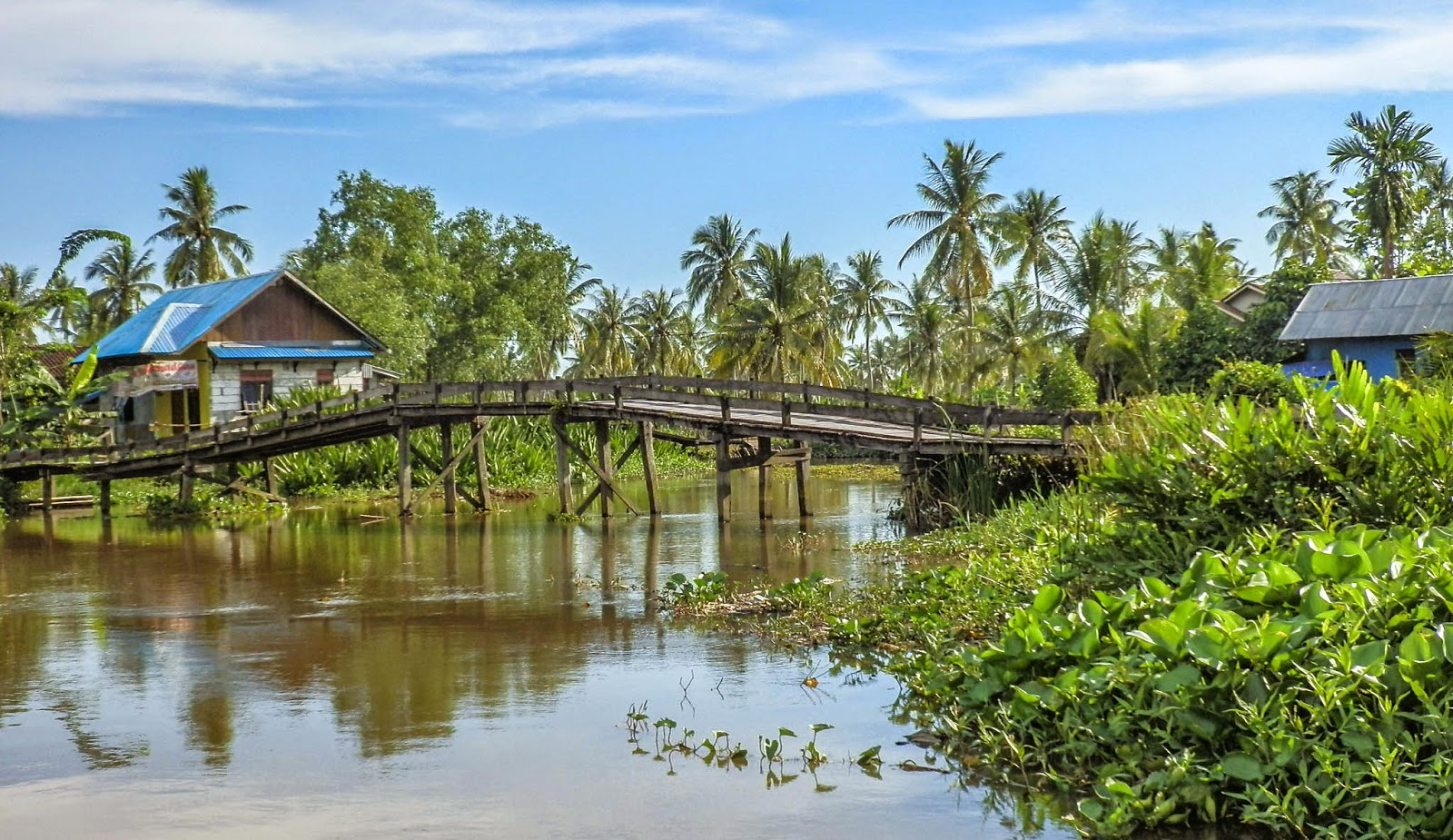 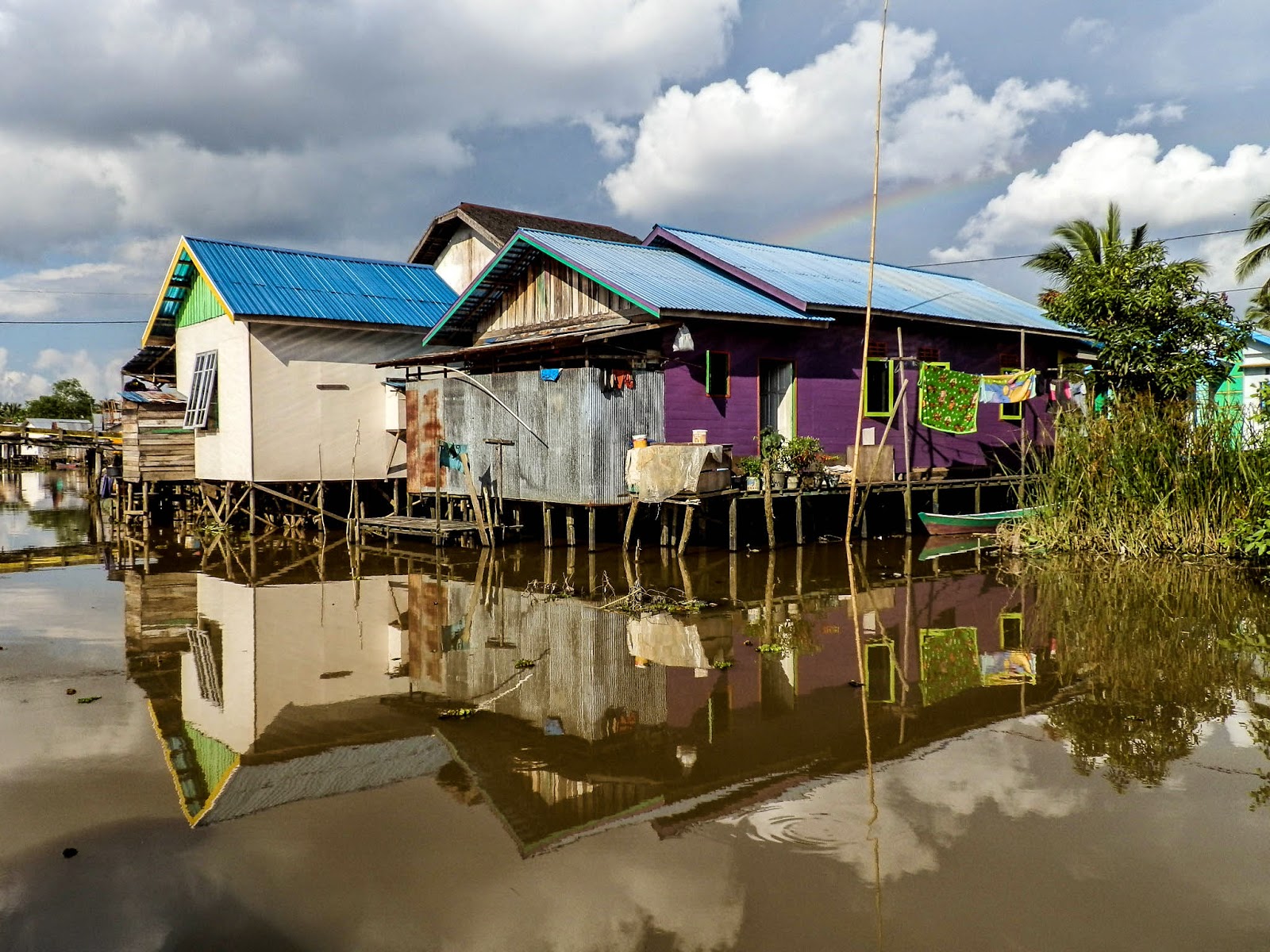 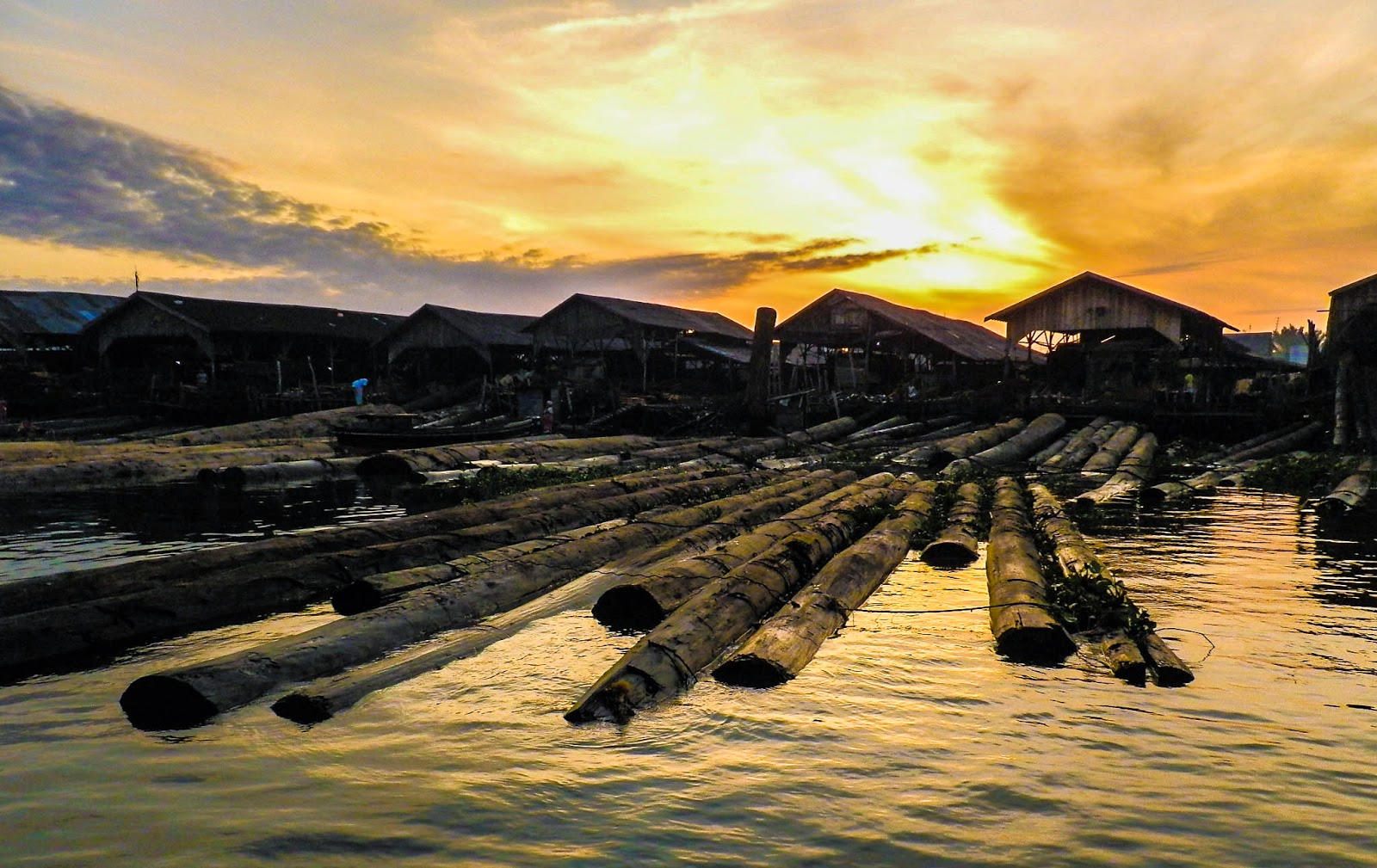