Propaganda and commercialization of War in Korea 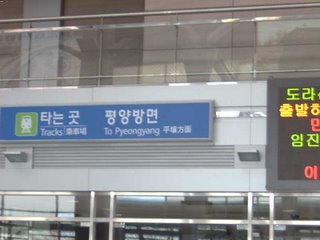 claimed recently that they had tested nuclear bombs. Irrespective of that, relationship between the two is much better since the Sunshine policy of Kim Dae Jong in 1998. But propaganda is still lively; the best way to experience it is by listening to tour guides. Tour guides everywhere represent the most blatant, non-intelligent and simplistic expression of the absurd concept of nationalism. I went to the De-militarized zone (DMZ) between the two Koreas and as expected, our tour guide provided a lot of interesting tid bits (Of course, I wonder if all these tour guides are given some training by the government on what to say). She kept on referring to S Korea as Freedom Country and as Communist Country. (How would the Chinese react to such statements; given that is the largest trade partner for the Freedom country?). She also convincingly told us that people in N Korea worship Kim Jong Il, that body of the late Kim Il Sung has been preserved hoping that someday he can be got alive to lead the country again, that their children are brainwashed from the age of one and the numerous deceits and terrorism attempts by N Koreans. She also told us about the Joint Security Area (where soldiers of both Koreas patrol) where its not allowed to smile at soldiers; wear skirts, jeans, snickers; have unkempt hair; and most surprisingly to point finger at any direction. But all the while, she kept on iterating the intention for unification and its possibility in the next 15-20 years.

The Korean War is a sad incident where people from the same race with shared history of misery turned against each other and slaughtered 6 million. But today, the war and its leftovers offer ripe opportunities for tourism dollars. So the DMZ has become the most popular tourist destination in with tours costing between 50-100 dollars. Young army officials pose with tourists for snaps, even take snaps for tourists, help fix binoculars for observation, and act as tour guides in many locations. The funniest thing is that the binoculars in the observation points charge 50 cents for viewing; this in the context of the fact that S Korea spends up to $20 billion a year on defense.

I would have loved to hear what the North Koreans say about the S Koreans and the . Someday, I hope to be able to travel there.