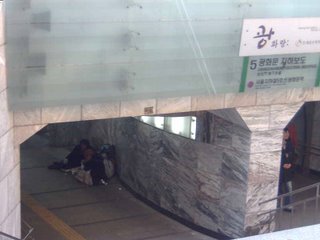 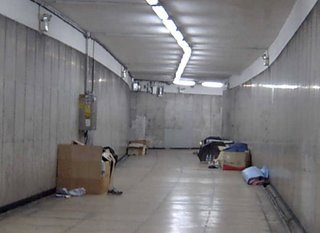 I spent last week at . is known as the geekiest country in the world. It is the place where trials are going on to develop fully connected homes where one can control any device through any device. So it is possible to control the Air Conditioning from office via internet, download movies for viewing over phone, and visitors can leave a video message at the doorbell if no one is present to open the door. is very lively with shiny happy young people dressed in fancy clothes and flashy hairdos roam around neon lit streets. is also a country where people seem extremely polite and generous to one another.

But not all the 50 million South Koreans are so geeky. On the night streets of , one can see drunken old people contemplating their own urine. And when one goes down the MRT (Local train) stations, one can see what life is like for the under privileged in . I could see huge cardboard cartons in many MRT stations. What I thought to be abandoned used cartons were actually homes for the homeless. In many Asian capitals, mysteriously, one sees fewer beggars and poor people than in or . In , they all reside in these underground stations. The sight is disturbing: though I don’t think that humans are much special than plants or animals; I did feel disconcerted watching these men sleeping in these used cartons used for storing cheap goods to escape from the chilly Korean winter. (I did manage to take some photographs).

On the local train, I also spotted a beggar who was doing something usual. He was placing an empty envelope on the lap of every commuter. The envelopes had something written on one side in Korean. After some time he started collecting those envelopes again; some people had placed some donations in the envelope. I had never seen anything like this before. My dad told me later that something similar is done in Kolkata trains as well.

How do the Korean poor see the rest of their countrymen? According to official figures 15% of the population is poor and is a country where everything is almost twice as expensive as in the ; except for a used carton which probably comes for free. What is Digital Multimedia Broadcasting for a man in the carton? What does the beggar with the envelopes think about the ipod nanos held by most of his patrons?

P.S. Next post on the continuing war between the North and the South and its touristy commercialization.