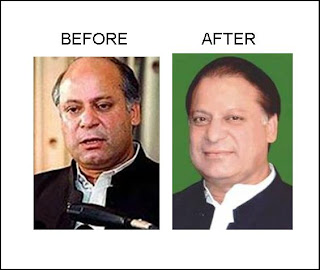 Something or the other keeps happening in everyday, all seemingly historic events. Finally Musharraf decided to give away his army role, much to the delight of so called “democracy adoring” western powers and . Why was he so reluctant to give his military post? That’s obvious; he didn’t want to do his laundry everyday. I can fully understand the logic of developing extreme affinity for a khaki dress that can be worn day after day, without a need for wash or press. And that’s also the reason why everyone was apparently so anxious to get rid of him from the army post. After many days without a wash, even if the khaki dress can conceal the dirt, it begins to stench. And soon many Pakistanis came out openly against the stinking uniform. These were the same Pakistanis who had hailed Musharraf’s arrival as the revenge of the darker skinned not-so-English-savvy majority over the accented English speaking fair skinned political elite. Even Adnan Sami lost weight as a mark of his protest.

And who should be the next prime minister? There is Benazir, who, during her stay in the was so inspired by the show “Deal or No Deal”, that she decided to try it out in real life with Musharraf. Of course, it later turned out that everyone involved in the political sphere of was involved in “Deal or No Deal”. There is Imran Khan, who has shown how good he is with “reverse swing” with his flip-flop attitude on Musharraf.

But who should govern next? If the Pakistanis have any common sense they should elect Nawaz Sharif. A man who can re-grow scalp hair at the age of 57 can surely achieve anything on earth. With his new found Davidian looks, he can provide inspiration and hope to any man and bring back the plentiful harvests the valley is known for.