Trip to Central Java: The Places 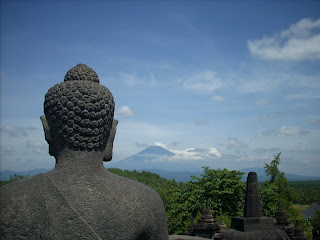 My trip to Central Java began with a visit to the ancient Hindu of and the Buddhist . One cannot go inside Prambanan as it is still being tested for structural instabilities following the earthquake of 2006. The famous Javanese dances based on Ramayana are often conducted in both the temple complexes and tickets cost upward of US$15. I wonder how the local believers can still remain pious if the Hindu gods have moved so upscale and decided to focus only on the foreign travelers segment.

The next day I travel to Borobodur, the most visited place in . From a distance the temple looks like an assembly of several thousand Lego blocks and sticks. But the beauty of the temple lies in its sheer scale and its location in the midst of lush green hills and blue volcanoes that combine with the sculptures to provide amazing panoramas. The first six storeys consist of over 2500 bas-relief panels depicting Buddhist stories. In all of these panels, the followers are shown sitting in very cramped positions, squeezed against one another. I don’t know if that’s to fit in so many stories within the temple walls or if Buddha’s followers really had to rub against each other. Didn’t they get diseases then, like many Muslims used to get yaws through physical contacts at cramped mosques in ? There are also over 500 statues of Buddha in the complex. Buddha may have shunned material life but the amount of wealth spent on making Buddha statues around the world must be bigger than the GDP of several economies.

While the entry fee for foreigners for the UNESCO heritage sites of and Prambanan is in excess of US$10, for other temples such as Plaosan and Mendut, it's free and one just has to sign his name and other details in a register at the gate. As such, these lesser temples are locally known as the “Cheap temples”.

On the third day, because of the rain, I have to do with only distant views of Mt Merapi, the most active volcano in . So I head towards Dieng Plateau, a site of complex volcanoes, oldest Hindu temples in , and a green colored lake caused by volcanic activities. The journey itself is an experience with winding roads through huge lush green hills making one feel like an ant in the universe. At the Kava crater, volumes of white smoke, boiling water, and intense sulfurous smells combine to give the whole place a certain gritty feel, a statement of “I don’t care a shit” from nature.

Over three days, I have spent more than 24 hours on a motorbike, and my butt suffers from my need for cheap thrills. So for the last day of my stay, I decide to take on Jogja on foot and public transport. The city resembles other Asian cities like , Mumbai or . But unlike any other Asian city, there is no sign of any construction happening. Probably, only ancient temples are being reconstructed in . Even Islam seems to have a somewhat hesitant presence here, shy amidst the grandeur of the ancient temples. And though one keeps on hearing muezzin calls from all angles, the mosques are rather small and nondescript. And Jogja is probably the Asian capital for street art and I could spot images of even Subcommandante Marcos in some walls.

I ask at my hotel if there is a bus stop nearby where I can catch a minibus for the beach. They laugh at my conditioning and ask me to just flag down one when I feel like. I knew that green clothes were banned at the Parangtritis beach because of the local myth that the sea-goddess loves and keeps anyone dressed in green. But to my horror, I realize that all my fresh clothes are some shade of green and even my hat is green. So I wear a used t-shirt and keep smelling worse than the chickens loaded onto our minibus. Without my hat, and with the tropical sun scorching, I am the only person walking with an umbrella in the beach.

Finally, I am at the sultan’s harem where a person from UNESCO explains how the sultan would choose one from his lot of 27 mistresses while they bathed in the swimming pool. I wonder if there are any monuments in the world that are dedicated to the unchosen, those who had to bathe in Sultan’s view everyday knowing fully well that they won’t be chosen. A moment of silence for them, please.