Trip to Central Java: The People 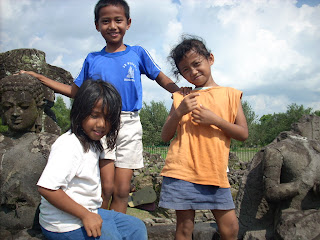 The trip to was an impulse decision, and after a long time, I was traveling all by myself. When I landed at Solo airport, probably the smallest international airport in the world, I could walk behind the immigration officials and pretend to supervise them as they checked up their computer system to see if my name figured in their black list.

Central Java consists of the towns of Solo and Yogyakarta (Jogja), the cultural capital of . It also hosts the Borobodur and Prambanan temples, as well as the active volcanic sites of and Dieng Plateau. This being off-season for tourists, every tour agency got to know of my presence pretty soon and would know my name even before I entered their office. And for the rest of my trip, I was mostly being driven around in a motorbike by one guide or the other.

Every person in Jogja is a Batik pimp. In most cities in developing , if a single male tourist walks through the city, it is almost taken for granted by locals that the dude is looking for instant carnal happiness. In Jogja, however, the locals are certain that the dude has an insatiable lust for Batik. And they argue with me at lengths to buy Batik products from their patron store. There are also intense Shaolin-temple style Batik rivalries as these touts bad-mouth each other’s store. To get rid of them, I say that I have already bought Batik articles for everyone I know and even for those yet unknown friends whom I will meet later in life. But one tout retorts that I have missed out my ancestors and it is my moral obligation to offer Batik over their graves in line with the Javanese spirit!!!

And every tour guide in has his own personal tragedy linked to the earthquakes and volcanic eruptions so typical of the place. In the earthquake of 2006, one of them had lost his mother while another had lost his toilet, a dream project for him, built after years of hard work to avoid having his poor family to use the public toilet.

Jogja, being the cultural capital, also has a lot of young people playing guitars and singing as they beg for money at traffic lights or on board mini-buses. And most of the commuters oblige, seemingly happy to listen to some senti-rock for two seconds in between the excessive heat, noise, pollution and mad rush.

One day, as me and my guide are forced to wait in sheds several times to escape the rain, local people ask my guide about all my details: where I come from, my race, my job, my hotel, my marital status, my occupation and my religion. They take my free-thinking nature with a brief pause of contempt; but it’s probably a sea-change from Suharto days of 1965 when a million of godless leftists were slaughtered to adhere to Panchshila morality. Indeed, my guide tells me that most Indonesians are Muslims or Christians only by identity card.

I meet a university graduate, now a taxi driver, whose real passion is his side business of making copies of books. He takes great pride in hunting down books banned in and making copies of them available. He uses a simple Xerox machine and shows me bootleg copies of some books from and and hopes that he would be able to attain that quality of copying soon. He foresees great demand because he is certain that works of any good local writer is sure to be banned in . (e.g. some works of Pramoedya Ananta Toer and Seno Gumira Ajidarma)

There are the children of , playing carefree in archaeological sites over a thousand year old, their images more beautiful than any of the idols around. And there are the faces of poverty that is so pervasive in . Old men walk around naked, hair unruly like a Rastafarian, so poor that dignity is a hyper-luxury. Old women squat and beg in densely populated streets, hoping for that rare spark of compassion from the millions who are also struggling to make ends meet. The lives of these women are probably of some worth only to foreign photographers looking for the countless ridges and furrows left over copper faces of these women by years of hardship, just as common tourists appreciate these ravages of time in places like the . Even tiny turtles and rats, available in thousands in the bird (pet) market, have someone to take care of them.

P.S.: More on the sights of Jogja and in the next posts.