Trip to Laos: The People 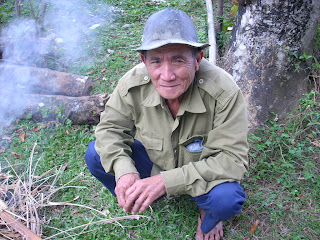 It’s hard to form an opinion of a place and its people based on short trips. The only people you meet represent extremes: on one hand are tour guides, hotel staff and restaurateurs and showcase touristy communities whose interest lies in giving you a good experience; on the other extreme are immigration officials, predisposed to hassle you.

But one opinion can be formed about with certainty, that life follows a slower clock here. Even the capital is a world far away from productivity management tools where a twenty kilometer ride on the highway can take over an hour and toilet doors bear signs saying “Slowly Push”. At restaurants by the , waiters take their time to serve and by the time they have served us, they have forgotten our order already. So they ask us what were there in the finished plates in our table and accordingly make the bill. At the Phou Khau Khouay nature reserve, even the white moths are too lazy to fly and avoid getting trampled by our feet. Since the elephants are too laidback to come out and please us tourists, local guides seek to entertain us by doing back flips and somersaults after running against a tree, high adrenalin moment of their village life. Tourists argue with guides on why the eco-trail that was supposed to last seven hours got over in only two; the guides retort that they should have walked slowly like the Laotians.

The idea behind a guide in Laos is that he will just be taking you to a place of interest and would have an English vocabulary limited to just “Thank you” and “same same”. That’s why whenever we seek a guide; more than two of them join us so that they can at least talk among themselves and not get bored while showing us around places so familiar to them. Laotians have a habit of continuing to talk in Lao to a tourist even if we indicate that we do not understand anything. And after six days, I can only respond to “Sabai Dee” (Hello), “Kop Chai” (Thank You) and “Boh Penh Nyang” (Never mind) and I feel ashamed for not knowing the language spoken by over 6 million people in this world.

There are the ever so joyous kids in who have become conditioned in a Pavlovian way to wave at foreigners whenever they pass them by. At Van Vieng, they raid the river to snorkel and catch fish. At , they help their mothers run shops. These women of appear to run most of the economy, selling everything from cooked lizards to fried chicken heads, pig’s intestines, snake wine, and live sparrows. They give out hearty laughs when we ask for names of unfamiliar looking food. The women run petrol pumps, work as police, and beat up men in the streets. If a man happens to be running a shop he calls up his wife to decide on the final price while bargaining. In , the sisters are in, and have taken the frontline. Men almost seem to play a secondary role, preferring to stay undercover, in the shade of their tuk-tuks or the comfort of a monastery.

The monks, dressed in bright colored robes, are an integral part of the Laotian landscape. They look rather prosperous compared to the common people in the campus of the countless Buddhist temples in , those selling caged sparrows or crude ice-creams with their weather beaten faces. The monks do serve a purpose though. A local tells me that since they have a lot of free time unlike ordinary Laotians, the monks have learnt the best English in and also help tuk-tuk drivers learn basic English.

Amidst the serene temples, ramshackle markets, lush green hills and crystal clear river waters, we also see other aspects of life in . A man kills a baby goat for meat by holding its hind legs and smashing its head with a swing against a lamp post. Few men and women beat up badly a person in the main road as everyone watches. The police stop cars on highways asking for money. The border patrols catch tourists by the and ask for $5 to help buy pens for their department. Not enough contribution has been collected yet to buy paper to make receipts for these collections.

Living in a communist state for over 30 years, I wonder how familiar a Laotian tuk-tuk driver, a bribe seeking policeman or a fried-lizard seller is with Marxist ideas of cultural hegemony, inevitability of history, surplus profit and Feuerbachian religious alienation. All the same, there is a certain dignity and grit in the way they live their poverty stricken lives among tourists from the . As a tourist, I have a desire that their lives continue as this and a Laotian woman by the street keeps selling four fried bananas for twenty cents forever. But I believe that the Laotians have their own desires to free themselves from this hand-to-mouth existence and hopefully they will prevail over our touristy desires.

In local newspapers, the front page carries a telegram sent by the president of to the president of hoping for better relations; details of 200kg of smuggled chicken from being caught by border patrol; and that 70 elephants would be used this year for Lam Namtha festival. Any investment over $10,000 is reported. At one section, students complain in detail about too high standards being set by companies for recruitment and the editorials everyday cover general worry about Thai culture wiping out Lao culture in 20-50 years time especially with respect to language. But that is unlikely, as is evident from the Lao language enthusiasts like Mr Tee, a driver of oil tanker, who gives us a ride from Phabot to . Though a truck driver, he is also a Grammar Police and keeps telling us nuances of the Lao language throughout the ride.

Finally, there are the beggars of , moving around the alfresco restaurants where foreign tourists seek freedom from the burden of excess. The submissive expressions in their eyes remind me of that Minutemen song “”:

…. The injustices of our greed,
The practices we inherit,
There on the beach,
I could see it in her eyes,
(But) I only had a
(and its) Five cents deposit