Trip to Laos: The Places 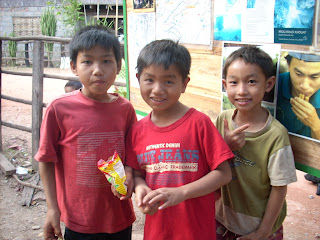 We landed up in with six days to spend and not much of a plan. So the first place to visit was the state-run . The staff at the tourist center asked us to check out the photographs in their displays before we decided whether it was worth going to that place. Their top recommendation was a trade council building where one could watch English films, play snooker and visit restaurants. We get even more suspicious of the whole point of coming to when we see that the tourist map of showed even Fruit Shake stalls as tourist attractions. But we were not to be disappointed.

We began with a trip to the . The museum seeks to cover Laotian history from prehistoric days to the present and therefore begins with a crude wooden toy-like model of a dinosaur. All the same, the museum is well organized and does manage to provide a quick overview of Lao history. The most interesting exhibits are ones that show “progress always” after the communist takeover: there are framed pictures of a man using fax machine, people attending computer classes, several graphs showing growing production in local industries, and a showcase of medicines produced by the local pharmaceutical company.

The main attractions of are within cycling distance and one of the more popular attractions is the Patouxay (). Built to mimic the Arc de Triomphe, it is more of a monument to teenage romance with its walls filled with heart signs and love slogans. The city also has several Buddhist temples or Wats, one of which, the Wat Sisaket, has over 10,000 Buddha idols. Around 25 kms from the city center is the , a small park filled with large concrete idols. Built by an eccentric and self-proclaimed saint, the park is as tacky as it gets with a giant pumpkin being its main attraction. But who knows, may be 2000 years from now, it will be a world heritage site.

Around two hours from is the Phou Khau Khouay nature reserve. The brochures of the place showed pictures of many majestic waterfalls, but once we reach there, the guides tell us that the water has dried up from those falls. They take us to an elephant observatory through a forest trail and the guides keep showing us insects and plants describing them as “some kind of insect” and “some kind of plant”. One guide tells me that I could have passed for a Laotian but for my body hair that makes me look more like the Slow Loris, a local primate.

Three hours from are the idyllic , filled with extensive limestone karsts, crystal clear and deep blue Nam Xang river, and many caves. The sights are breath-taking; however, a local disco with booming woofers spreads the message of Britney and Rihanna over the landscape. At the nearby , young women and cows bathe in crystal clear waters of the Nam Xang, oblivious of the foreign tourists around. The village Don Quixote, a man probably in his fifties, comes running at us, his shorts well above his chest, and keeps talking to us frenetically in Lao. After twenty minutes, we understand that he is just asking for cigarettes.
However, the most happening places in and in general are the local markets. A foreigner can get here anything that he doesn’t seek in his usual life: packets of fried lizards, stalks of bamboo filled with grated coconut and sticky rice, bee wax fried in banana leaves, buffalo horns, t-shirts saying Olive Oyl!!! Look alike of Ferrero Rocher chocolates are sold under the name “Success Chocolate”. Barber shops offer to pull white hair for one hour at the price of $3, ear digging and cleaning is offered for $1.8. And as for the fruit shake stalls of ; with offerings like Coffee-Banana shake, they do deserve to be tourist attractions anywhere in the world. 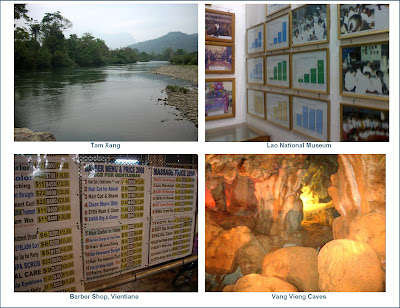