A walk by the beach 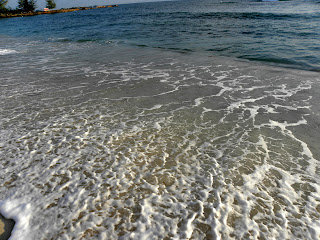 Another wave just hit the shore; the one behind smashed against it as the earlier one was retreating without caring for politeness. A stream of sand particles hurriedly ran after the retreating water to watch this family feud. Watching this set piece over and over again from the cool shade of a forsaken beachside shack, Mad Professor playing in my head, the great blue sea stretching out in front of me and then taking the form of the sky dotted with the white clouds of Monet; the monotonous nature of the whole thing can be distracting enough. From time to time, as I attempt to finish the magazine article, I am tempted to look up at this numbing spectacle that has probably been occurring at this place for millions of years. Later in the day, as I take a walk by the beach, my mind is occupied with the search for unbroken shells. The white smoothness of their shells, or the intricate patterns of Fibonacci, which spot in earth were these creatures playing when they were alive, before being swept by the waves to the shore? The soft sand forces my walking to be slow. Local children are enjoying themselves for hours forcing them upon the waves in different positions, something pleasing to eyes given that the shorelines all over the world are fast becoming private beaches dotted with freckled skeptical sunbathers. I encounter a fallen tree, all signs of life sucked out of it by the beach sun, the brine and the millions of organisms busy at humiliating it at its fall. Pablo Neruda had asked if there is any sight sadder than that of a vacated train standing in the rain. There probably is, in that of a fallen tree by the beach, pockmarked all over, being drenched every now and then. As night falls, the stars take over, and this is when the much abused feeling of being irrelevant in the context of an enormous and timeless universe. While it can be soothing to come to a realization through this belittling sensation, it can also result in a startling conclusion that the grieves of the billions of earth’s poor to don’t really matter in the true scale of the universe. The modern city is the plan of civilization to douse out the stars with urban lighting.

But then didn’t the invisible cyanobacteria bring about the most enduring and enchanting change on earth? If there was a God, she was a cyanobacteria. Monotheism is therefore incorrect while the Hindus counted one too few. And just as tempting it is to fall into a slow existential whirlpool while facing the stars by the beach, it is equally tempting to make a canoe out of the fallen tree and venture recklessly into the ocean that lies in front.

Loved the line: "If there was a God, she was a cyanobacteria. Monotheism is therefore incorrect while the Hindus counted one too few"