The streets of New York 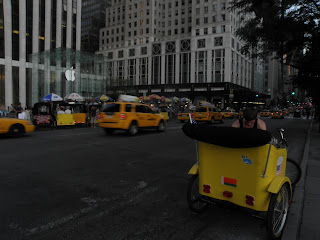 Sharply dressed mannequins and homeless people watch us walk past; the former from the comfort of the air-conditioning inside; the latter from the versatility of store front kerb that can act as both a chair and a bed. At every intersection in the most simple city plan ever, Bangladeshi vendors have taken their rightful place selling fresh fruits and vegetables. Arabs are standing next to them selling pretzels, kebabs and kneesh. Waves of yellow taxis are swarming by, a Sikh inside each one of them. Group of black gays are having a good time, their loud jokes and delicate mannerisms quite in contrast from the porn and MTV fed image of black men. Two Latino women are having a good time as they are digging the streets, their hands waving in dance moves from time to time as they revel in the glances they are able to attract from this split second city. And if you look down, there are these small shabby dogs walking around their lady Elvira with an expression of intensity as if they know what it all means. Stocky Filipino ladies are standing in the middle of the pavements, equal distances separating them, body length billboards hung on both sides. They are all talking on the phone to someone, perhaps to take their mind of the boredom and this exposure. Millions of glances intersect each other. Millions of glances strike each one of us and then skid off to somewhere else. A long queue is forming outside the Diesel storefront because the biggest and baddest sale ever for the season is on. Money is what civilizes us, else we will be scampering for everything like hyenas. And amidst all that, suddenly I see a hand raised up from a tall body, asking this crazy world to stop for a while and consider. No, he is only trying to flag down a cab.

Is there a meaning to it all? The giant swarms of people crossing each other at every zebra; the masses of people menacingly rising from the underground of subway stations; the fingers balancing several plastic bags, French words written over them. There surely is; we are all serving our role in a giant experiment; to find out what would work best when mankind would finally achieve immortality. That’s when everything we do will make perfect sense since it wont be wiped away by death. So God does exist as a concept, just that there is no God now. There will be not one, but many Gods, since God will be a corporation, not an individual; the corporation that invents the elixir. It will not be a God with a carrot-stick plan for everything, but just an entity that finally gave an indisputable meaning to life. Till then, we all have to figure out which mascara works best on us. Believe me, it’s worth it.

Most especially moving is amidst the hustle and bustle, you, the vacationista is left with existential alienation of sorts.