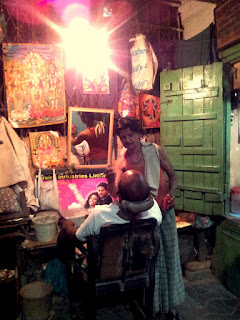 I always had a feeling that Kolkata is either the place where the world begins or the place where the world ends. In its streets, there is a certain grit and a sense of struggle for survival that is not palpable anywhere else. As I walk the streets, the sights, sounds and smells, make my heart melt, froth, jump in bubbles, and then sink underneath an unnamed tectonic plate of calmness. I feel happy to be born a human being. Among the noises coming from the seething mass of humanity, I hear suggestions from booksellers to consider Rilke. A few steps more and comes a tease from a prostitute, ‘Chalna hai room pe?’ (shall we go to some room). At the next corner, a dignified old man is singing praises of the Bengali language, “Mayer Bhasha, Pakhis basha” (my mother tongue, a bird’s nest). Nearby, a man is walking around selling, guess what, fake bird’s nests. I walk along with him for a while and pass by a duo of aggressive street sellers who are screaming “chori ka maal, hath daalo, heera nikalo" (stolen goods, put your hand in, take diamonds out). All they are selling are some shampoo bottles and other toiletries. Few blocks down, a young lady is hugging a street light pole and crying, looking into infinity. She is not distracted by the shouts from men pulling the infamous hand- rickshaws to claim their right of way hoping not to lose that much cherished momentum. All this before the street dogs take over.


This is a city where I had lived before without knowing much, floated on the surface, least bothered to turn around and look deeper into the lush coral colonies. So this time, the urge was overwhelming. My pilgrimage begins with College Street where hundreds of ramshackle book shops queue up in anticipation. Most popular book on sales is an exam guide for Kolkata Traffic Police test. Move aside GMAT or GRE, this test is the godfather here. These book sellers still lay out fifty years old editions of some text books every day, waiting for the clock to wind back. I buy a cheap CD of the comic strip we all grew up with, “Nonte fonte”, and the man whispers into my ears, “shall I get you some adult movies?”. A man in rags selling tea by the roadside has bright eyes and a burning stove. The stove is what all his possessions are, but he has three customers waiting.


Tagore songs are playing at the gritty subway stations, called metro here. Four rupees for a metro ride, that’s 10 cents. The spirit of the sickle and hammer still breathes here, very weakly though. Kolkata is a place which makes you feel nostalgic about a past and a future you never knew anyway.


As always, I have never worried about addresses in Kolkata, everyone knows every place and is ever so willing to guide you. Asking an address is one of my most cherished experiences in the city. One person become a group of five as they seek to help out; they first assess if the other candidate helper is equal to this responsibility of telling the right way. Then they discuss alternate ways of going to the place and the pros and cons of doing so; they test each other’s intelligence, any sub-optimal suggestion is severely criticized, and voila everyone has now agreed on what path I should take. Smiles galore soon.


At Mallik Ghat, just under the Howrah Bridge, is one of the largest flower markets in the world. But this is also a place where you can easily forget the association of flowers with beauty and fragrance. For this place is as messy as it can get with muddy patches and fermenting waste everywhere. None the less, over there is a whirlpool of marigolds. Right next to it is a spray of red hibiscus. Marigolds, and more marigolds, marigold snakes and marigold lakes. Two people are screaming at each other and bargaining as if the first to give in will never be able to show his face to the world. Porters are rushing along in Japanese women footsteps, somehow balancing a huge load of the tender flowers. A signboard has been put up “Please don’t spit”, that’s almost like putting up a board in a battlefield saying, “Please don’t make noise”.


On the way from Howrah to Kumartuli is the stretch where the best bodies in Kolkata assemble. For this stretch has all the granaries of Kolkata and thousands of porters jostle around, loading, unloading. As I walk along with an ant column of porters, there is a constant barrage of honks. They sound pitiful, like some innocent helpless young animal on which I may have stepped on. At the iconic Howrah Bridge, an old lady has a small rag in front of her, some 50 cloves of garlic spread in front. That’s all she hopes to sell. She has lived till now, how long will she live more? At Kumartuli, where they create the gods, the shameless idols are still waiting for their heads and clothes. A group of artists work at a furious pace to make small yellow idols. One of them tells me that the idols are for the cremation rites of the dead. A thousand of these are spread in front of them, each waiting for its dead man.


Next day at the Victoria memorial grounds, I see young mothers spread out their toddlers for some sunning. The benches are all taken up by couples, some kissing furiously, unmindful of the afternoon sun. Outside, is paradise, as street hawkers are selling fuchka, egg rolls, jhal muri and ‘soft’ drinks. A well dressed man, the babu, steps out of his car, warning his driver in a harsh tone to behave responsibly while waiting, after all expensive suit and laptop is inside. Kolkata is a place where no one forgives anyone. But it is also the place where grown up people have the most beautiful smile.

P.S. Some pictures of Kolkata here.
Posted by Shivaji at 4:57 PM

Very nice blog. I hope you can share more of your blogs soon. My bad credit jewelry financing agency likes this.