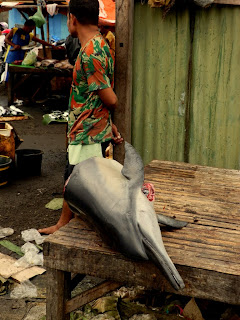 The highlight of the town of Ende in Flores is the Pasar Ikan, or fish market. About a dozen vendors sat on stilted platforms on both sides of a narrow alley connecting Ende with the sea that opened out into the beach where the catch from the sea was brought in and auctioned. Giant yellow fin tuna lay on these stilted shops in a timeless manner. At places, there were lonely cut sections, hinting of the greatness of the fish that it belonged to, the fish that had lived in utter disregards of the land and its dwellers all its life. Lonely too, in death, was a very colourful fish, surrounded by the death all around in shades of grey. Neat heaps of small fish had been arranged by some of the men, with an arched fish on their top like cake icing, almost looking happy and frolicking in permanence. The stench and death of this place must have appeared very unbearable and shocking if there was nothing else at that place, an omen of something dreadful that is approaching. But there were the sellers and the buyers who made the place look normal, even pleasant, with their warm smiles, gentle eyes, and humble voices, some asking about us, some explaining the fish they had put on display and others telling us about their lives. Two old men with broken teeth said that they came very early in the morning, hoping to get a good bargain from the fishermen, who had spent all night out in the sea. By midday, no one came to Pasar Ikan, and they too left for their homes, leaving the useless fish for the cats and the rest for icy hotels. “Lihat raja saya”, screamed a man from behind, asking us to look at his king, an unusual yellow fish with a giant head with a disproportionately small body. Its mouth was open with an unfinished command. Two dolphins lay in neglect, with only the front halves of their bodies. Their eyes were unusually small and sad unlike the fish. Their skin was smooth and rubber like and their long snouts had hundreds of tooth like small kerbstones. It seemed like they had been executed. Perhaps they had been mother and child, which one died first and did the other see it die?

At the beach, the auctions were still going on. Young boys, some naked, were ferrying in small boats to bring the catch in buckets from the bigger wooden boats anchored a few metres from the shore. These boys looked much focussed, perhaps pretending to be more worldly-wise than they really were to show off against those studious boys from town who had come along with their fathers, just to have a look. Two men brought on shore a giant manta ray, holding it by its fins. They dumped it on the sand like Hector. A crowd soon gathered around it, just to have a look. They pushed us to the front to take pictures. Some asked us to touch its mouth. It was soft like a grandfather’s gums. After some time, Achilles came. He looked young and strong. One of the carriers of the manta handed him a blade. He stood over the ray, his legs spread apart, and then holding the blade, pointed his finger at all of us to give him a darn good ask price. Everyone was too shy and awed by his stance. When a bunch of scrawny old men grouped up to make a hesitant offer, Achilles hurled a volley of praises, about the great qualities of Hector and what it took to slay him. But perhaps he was just waiting to say this, because despite his violent instant rejection of the ask price, he instantly obliged. Hector was chopped into fine pieces and dispatched. The crowd dispersed and we lost Achilles.

Similar auctions were happening at many places as the boats kept coming from their nightly sojourns. The shore was the border where the people of Ende exhibited the spoils of the battles they fought every night riding on the upwelling of the Sawu Sea. Sawu Sea, named after the tiny island of Sawu. Sumatra didn’t get one, neither did Kalimantan, Sumbawa or Lombok. But little Sawu had a sea. People change names of roads, towns, and countries at their whims. But names of seas hardly change. The only possibility is South China Sea which the Filipinos may someday get everyone to call as the West Philippines Sea. As for Sawu sea, the future of its name looks safe. The action at this died down soon and everyone left to allow the boats to rest in their cradle, the Sawu Sea. The place came alive again in the evening when the gangs of Ende took over the place. These gangs comprised of boys of all ages, some perhaps only five years old. Like a bunch of monkeys tending to each other, the younger ones sucked up to the leaders by helping them to apply hair gel and then painting them in shades of white, gold or even blue. After decorating their masters, the youngest boys would take off their clothes, stand in a line, run towards the sea, and jump into it with somersaults. They did this many times while the older boys looked on. The older boys were also disengaged from us. We cheered the young ones on and this made the kids try to leap higher and further. Some fell awkwardly and were greeted with laughter. They asked us to cheer them more. Once tired, they rolled about in the black sand and then took one final shower before packing up. The youngest of them all asked if we had money and giggled. One of the older boys came up to him, caught him in an arm-grip, demobilised him and pushed him into the sand. After that, they left one by one, looking ready for the night.

P.S. More pictures of Flores and Sumba at https://picasaweb.google.com/das.shivaji/FloresSumbaAndBali#
Posted by Shivaji at 10:16 AM